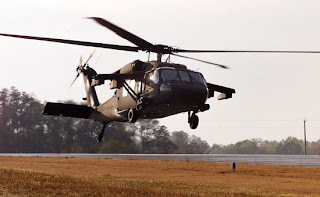 Fresh from the recent debates on equipment in Afghanistan comes this little gem of a story.

Gen Dannatt is on his last tour of Afghanistan.

He has not been as vocal about the spending row as others but indeed has had a certain behind closed doors meeting with several high ranking tories. That is for another post.

But the issue I wish to point here, is the fact, that just the back end of last week and the start of this week, is that during Dannatt's visit, he had to use a US Army Blackhawk helicopter to do his tour.

In the face of all that has gone on this week. All the debate, the spin, the lies, the 60% increase...............we find our army chief has to borrow equipment from the Americans.

And now summer recess in the commons so no debate !!!!

UPDATE:- When asked about his travel arrangements, Gen Dannatt replied: “Self-evidently... if I moved in an American helicopter it’s because I haven’t got a British helicopter.”

Full Story Here
Posted by The Last Of The Few at 08:57