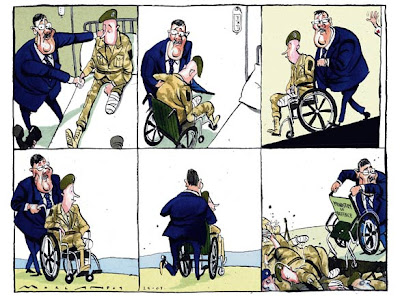 Fido the Dog hits the nail on the head with a top video.
See Here

"On a day when the bodies of four UK servicemen are flown back home after making the ultimate sacrifice in Afghanistan the MOD are in the Court of Appeal. Why may you ask are they costing the British tax payer tens of thousands in legal bills? To make the lives of our young injured servicemen some who have horrific injuries better? No, they are once again making our Heroes fight another battle for adequate compensation that must last them for the rest of their lives.
...
Sometimes your longest War begins when you hand your uniform in and rejoin civvie street."
Here here. Four more brave men brought back in body bags, sent to their death by a government which has no moral compass what so ever.

The same government which then goes to court to reduce the compensation paid to those soldiers.

The same government run by a coward who talks much about courage and yet fails to display any.

I also am led to believe that Simon Weston yesterday described Labour as using car crash politics............he can speak from experience.

Well I thought this image by Morten Moreland summarise it equally as well.
Posted by The Last Of The Few at 08:21

I prefer your cartoon LotF. Using the German national anthem I found rather OTT, but then again I have worked with Germans for years.

Yes Simon Weston did say that. It was on Radio5Live with Victoria Derbyshire yesterday morning and Gen Jackson, plus a couple of others whose names I'm unfortunately forgotten, discussed this.