Prat of the Week 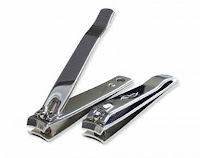 Now this new spot could have many contenders. Simply veiw the weeks political news or read Matthew Syed's column in yesterdays Telegraph but I feel without a doubt that this gent here wins this weeks award.

A man who gave himself a DIY circumcision using nail clippers was taken to hospital for emergency treatment.
The young man had to be rushed to the Lister Hospital in Stevenage, Hertfordshire. The wound was disinfected to cleanse it before he was given a bed in an observation ward.

"This is something we would advise men never to attempt," a medic said, "The results can be quite horrific and long-lasting and have quite an affect on a man's sexual performance.

A fabulous quote from the hospital spokesperson "Using a pair of nail clippers must have caused excruciating pain, even if he had had a few drinks beforehand."

Labels: prat of the week, stupidity

Had he bled out he could have got a Darwin Award.