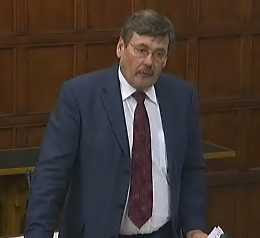 The Times has a top article on Bob Ainsworths moustache.

Now I feel the inadequacy of this individual needs to kept to the fore and I for 1 will do that when I can.

After all it was the biggest shock in the PMs re-shuffle. The man is only ranked 21 out of 23 way behind the Olympics and welsh ministers.

But hey as stated before Grodon needs a complete idiot to look after a derpatment he himself wants rid of. An individual who is a total lap dog, who will do or say exactly what Peter Mandleson.......ooops sorry Gordon Brown wants.
A basic gob shite of a shop steward promoted way outside of his area of expertise and who on a regular basis is proven not only to be a complete disasater of an orator but who who is held in complete and utter disregard not only by Mandleson but by the military he is supposed to oversee.

So here is said article and by the way I have not stopped laughing yet.
which makes a change because normally Bob Ainsworth and a good laugh are poles apart.


Bob Ainsworth is the Defence Secretary. He also has a moustache. This spectacular coincidence leaves Ainsworth the first moustachioed Cabinet minister for 40 years — and yesterday he reaped the whirlwind. “Is it a small rectangle of Velcro?”, pondered the Daily Mail, mystifyingly. “He resembles a character from an Ealing Comedy,” observed The Guardian, before adding, for clarity: “He has a bottle-brush moustache.” Even Ann Treneman in The Times joined the feeding frenzy, declaring Ainsworth’s facial-furniture “the most interesting thing about him”.

In practical terms, a moustache is no more than an eyebrow for the mouth; a hispid strip to frame the face and keep out the dust. Yet in the 21st century the moustache has become so overloaded with meaning that it is barely wearable. Most often it is taken to signify either homosexuality or the constipated mentality of an inept, small-town jobsworth (this is the implication for the railed-against Ainsworth).

Granted, there aren’t many men whose masculine aura is not degraded by the addition of a moustache. Exceptions include Tom Selleck in his Magnum PI prime, Nick Cave, Errol Flynn and Brad Pitt in Inglourious Basterds. But sometimes a moustache can make a man even manlier. Take Merv Hughes, the Australian cricketer: his mighty set struck fear into his opponents, eclipsing entirely the piffling efforts of Dennis Lillee, David Boon and even, whisper it, W. G. Grace. Salvador Dalí’s elaborately waxed curler became emblematic not only of him, but of an entire artistic movement — something to which Jeff Koons pays tribute with his Moustache Lobsters, now on show at The Serpentine Gallery.

The apogee of the British military moustache — large, thrusting, imperious — was displayed by Lord Kitchener on those famous recruitment posters. Its death knell was sounded in 1916 when an addendum to the King’s Regulations rendered the moustache no longer compulsory. The Times noted its passing thus: “The soldier in many countries and in many ages has worn it, either as a symbol of his manhood or a terror to his enemies ... [yet] we are not believers in the doctrine of Schrecklichkeit. The moustache does not make the man.”

Nearly a century on and the style is on the ropes, done down by Hitler, Blakey in On the Buses, and the Blue Oyster scene in Police Academy. The non-ironic moustache is an endangered species, and as such it deserves protection, not persecution. We should be evolved enough to allow what few examples survive to roam free across their owners’ upper lips.

Criticising Bob Ainsworth for his failure to ensure British troops are adequately equipped is fair game. Mounting an offensive against his moustache is not. Unlike Peter Mandelson (who once called Ken Livingstone’s decision to shave “a good career move”), Geoff Hoon and Stephen Byers before him, Ainsworth has shown unusual bravery by refusing to cede to the mob and edit his moustache.

Still, Ann Treneman will not be swayed. “It’s not just the fact that he has a moustache,” she said yesterday. “It’s the fact that it is such a very weird little triangular one. What kind of person wants to have such a titchy thing on the upper lip. WHY?” All right, dear, calm down: it’s only a moustache.
Posted by The Last Of The Few at 11:53

LOL Idiotic little man. It's maybe the only hair he's got, given that the stuff on the top is a rug.

He needs to take some lessons from Hercule Poirot.