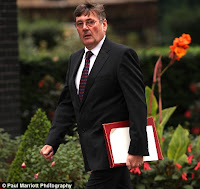 I drove to work this morning in a really good mood.

However at approx 08:06 it immediuately went bad.

The one the only Bob Ainsworth has returned from his much needed holiday in France in oreder to spearhead the review into the armed Forces Compensation Scheme and to answer some of the much needed questions being asked by media and bloggers a like.

I found him on the radio this am a repellant man.
I think Nicki Campbell did well not to want to choke him and indeed his attempt to try to turn the arguement back onto Campbell failed miserabley.

And for the record Bob, the court cases are not about penny pinching are they, they are about a fairer compensation scheme are they???? Bulls**t!!!!

If they are not about penny pinching then dont have the court case and sort out the compensation system. Do not go retrospectively back because the original award was viewed as crap. Just sort out the system.

And for the record IMHO 40K for a high velocity round through the leg, and 11 operations later is not even enough money, as in the case of Cpl Anthony Duncan.

I particularly liked the question this am when asked "are you aware of how you are viewed". Your answer was incorrect. Not someone Bob..........BUT EVERYONE!!!!
That includes your own government. Rated 21 out of 23 eh!..... and you run defence. What kind of sick joke is that?

Quite why anyone thought he would make a good Secretary for Defence is anyone’s guess. A sheet metal worker and shop steward at Jaguar in the 70s and 80s, he flirted with Marxism before becoming a city councillor in Coventry. Later he became a Government whip where he won a reputation as a bully. The ultimate loyalist, he was appointed after Blairite minister John Hutton resigned before Gordon Brown’s panicked reshuffle earlier this year.

You worked under both Des Browne and John Hutton, both of whom also under the stewardship of Gordon Brown have ripped the heart out of the British Armed forces.
I am glad you do not represent the constituency I live in.

But on a cheerful note this headline here made me grin.

If any reader listens to the link on his interview.........put the sharp objects away first please.
Posted by The Last Of The Few at 11:06

Don't hold back on your opinions my friend .. say it like it is ..lol

When I see Mr Ainsworth on the Television I am somehow reminded of Captain Mainwaring in Dads Army - Totally Incompetant !
S&F
BD

I was in a great mood until this came on.
Still a lie down and all was good again.
Until I see the news tonight I suppose.

The man can barely string a sentence together. He was on the Today programme recently, interviewed by Sarah Montague. I swear I could hear pity in her voice as Ainsworth bungled every answer. He isn't even 4th-rate. He's a complete loser.

306 days Fausty and is ass is gone