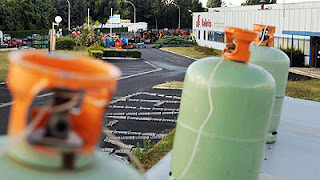 No I am not refering to Chablis.
Nor Escargo
Nor Rachida Dati

I refer to the usual French method of sticking 2 fingers up to the establishment and going hell for leather to get what you want.

It transpires that in Châtellerault, in central France, 336 laid-off workers have been occupying the New Fabris car parts plant since it went bankrupt in May. They have rigged it with acetylene and butane gas bottles, and are demanding car giants Renault and Peugeot – which provided most of the firm's business – give them redundancy pay.

If not, they say they will ignite the gas and destroy the factory.

Staff warned they would destroy the New Fabris plant in central France if they do not receive compensation for their lost jobs by July 31.

New Fabris was declared in liquidation in April, so the workers stand to get no redundancy money, although they are entitled to draw state unemployment benefit.

"The bottles of gas have already been placed at various parts of the factory and are connected with each other," CGT trades union official Guy Eyermann said.

"If Renault and PSA refuse to give us that money it could blow up before the end of the month," he added.

A delegation of the workers has a meeting on Thursday with Renault, which had no immediate comment.

Police also declined to comment on the threat by the workers, who are occupying the New Fabris factory at Chatellerault, near Poitiers.

The company is the successor to Fabris, founded in 1947 and put into liquidation in 2007. It was later acquired by Italian firm ZEN.

The case is the latest example of sacked French workers adopting militant tactics in order to improve their payouts.

The practice of 'bossnapping' - where managers are held hostage in their offices - has become relatively common during the economic crisis in France.

Now I am certainly not advocating terrorism tactics but I do sometimes feel we roll over a bit too much here. I kinda feel maybe a bit more of this attitude over here and we might find our services are a damn site better.
Posted by The Last Of The Few at 12:13