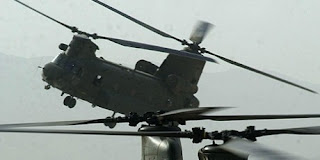 The subject of equipment in Afghanistan and in particular has been the subject of many blogs and many news stories.
Politicians, military chiefs have all been saying many many things.

I was to say this least a little sceptical of John Huttons delivered words to the Sunday papers yesterday. It smacked more of someone with a grudge rather that a political messgae. Bit of dollies out of the pram so to speak.

However I have blogged before about helicopters and in a proevious post made mention to 422 Million pounds worth of hardware that was bought in 2001. This hardware was 8 Mk3 Chinook helicopters that sat idle for 8 years due to a major purchasing cock-up and the basic fact that when it comes to defence spending the left hand does not know what the right hand is doing.
I for 1 was pleased when I heard we had increased the numbers of helicopters in theatre and found the 60% figure impressive.......hahaha....note the tone of my blog there.
Yes we know 60% of bugger all is bugger all.

But I thought great those 8 have been sorted and are now in action.

The Mark3 Chinooks were designed to carry members of special forces and were equipped with the sophisticated technology. However the Ministry of Defence then discovered that this was incompatible with systems in place in the UK and were thus forced to downgrade the specifications in the aircraft while other Western countries were upgrading theirs.

The helicopters, which had already cost the taxpayer an estimated 422m, are now going through the costly and time consuming work at Boscombe Down near Salisbury. Three will be ready to be used later this year, but there will be delay of almost 18 months before the remainder become airworthy.


So we spend 422 miliion.
We leave then rotting for 8 years.
Then when we need them it takes another shit load of redtape and another 18 months to get them airworthy.
The thing is we took delivery at the start of the conflict, and NO ONE thought "hey best get this sorted, we might need these.

Un-bloody-believable
Posted by The Last Of The Few at 11:12

They need nearly a total rebuild to upgrade the software. They ordered these without asking the advice of the communication experts. How daft can they get?

Standard defence spending protocol.
No bloody idea what they are doing.