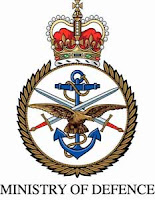 A lot has come to the fore this weekend about the MOD going to the court of appeal to reduce the Injured Soliders Compensation.

Subrosa did a piece and attracted an interesting comment from a reader of hers.

However I remember the story breaking on Fred Goodwins pension. A certain red headed lady close to the PM made the most riduculous comment about it "Not passing the court of Public Opinion".

Well should "The Court of Public Opinion" really be a barometer then trust me the MOD would fail on this attempted action.

But speaking of MOD failures.

Of late we have had rather a few spectacular ones have we not.

No, I am not talking about equipment or helicopters, or blatant cock ups in spending and purchasing. I am talking about clear cases where the MoD fought a battle and lost.

Gulf War Syndrome Up to 6,000 British troops complained of illnesses ranging from violent mood swings and extreme fatigue to blood disorders. Despite many studies the MoD found no evidence to support the existence of the syndrome. That stance was criticised in a pensions appeal in November 2005, forcing the MoD to acknowledge the term and award thousands of war pensions.

Gurkha settlement rights Gurkhas who retired after 1997, when the regiment’s base moved from Hong Kong to Britain, were granted the right to citizenship and permanent UK residency in 2004. Joanna Lumley took up the cause of those who retired earlier and the Government was defeated on the issue in May.

Iraqi interpreters The plight of Iraqis who became targets for Iranian-backed Shia militiamen was revealed by The Times in August 2007. Two months later David Miliband announced an assistance scheme but interpreters were dismayed by its restrictions. In all, 200 moved to the UK and hundreds of others got one-off payments. But 700 failed to qualify and 25 intend to sue the Government.

Navy Hostages In March 2007 the Iranian Revolutionary Guard captured eight Royal Navy sailors and seven Royal Marines who were searching vessels for contraband. During their 13-day captivity they were paraded on Iranian television. Upon release, the MoD authorised them to sell their stories to the media, but the handling of the incident provoked widespread condemnation and service personnel have since been banned from selling stories.

Atomic bomb tests Some 21,000 servicemen witnessed 46 atomic bomb tests in the South Pacific and Australia between 1952 and 1962. Many later developed cancer, skin defects, fertility problems and other conditions, but the MoD has consistently tried to refute evidence linking their ill health to exposure to radiation. In May a thousand British veterans, some terminally ill, won the right to sue the MoD for compensation that may total £100 million.

Rather grim reading.
Posted by The Last Of The Few at 10:14

Grim indeed LotF. I've just read in the Mail (aye that paper which makes me a racist!) that Wills of the fallen have been lost. May do a wee post on it later. Seems the MoD's standard comment is that the soldier never made a new Will, then fortunately one or two were found in Glasgow. I could tell you a wee story about the office in Glasgow but I won't. lol

It is grim SR.
And for some reason I think the story may tell may also make not good reading if you get my drift.