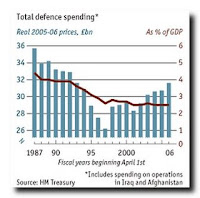 Ok we know we are in a bit of hole money wise in the UK.

Spending cuts now recognised to be a definate no matter who is in the hot seat in a years time.

And despite the horse keek regurgitated by the PM in PMQ's when sparring with "Call me Dave" no one believes him.

But when we look at corporation tax losses due to failed comapnies, more people out of work, reduced taxation incomes due to slow sales we see that taxation blackhole as reported in the times.

But does anyone realise how big that number is or what it actually compares too?

UPDATE: so as not to take any more stupid emails yes I am aware that the defence budget is not ALL being spent in Afghanistan. Good god.
Posted by The Last Of The Few at 15:16

Ole Brown's got a plan for bringing the boys home alright, it involves dribs n drabs aboard a C17 Globe Master landing at Lyneham and then taking the number 55 to Oxford.

It looks like it at times. 18 guys so far this month and only 2/3rds through it.

A coincidence? Stranger things turn out to be the truth as you know LotF.