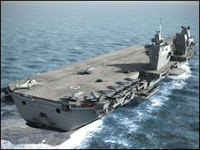 I have blogged on the topic of defence cuts.

Many others in the blogosphere have done the same.
Gordon Brown is potentially doing a U-turn on Trident.

The Army and the Navy are fighting amongst themselves.

But at the end of the day its the troops that suffer due to the Gordon Browns complete mis management of the countries finances and also his complete lack of credability as a P.M.

But finally a leaked memo surfaces.

The long-term future of two British shipyards was today thrown into doubt after a leaked memo reportedly revealed plans which could see them close them within a decade.

Reports claim the memo was sent from the chief executive of the Govan and Scotstoun yards, in Glasgow, to senior executives at owners BVT Surface Fleet, which also has an operation in Portsmouth, Hampshire.

The memo is reported to reveal that the Ministry of Defence is willing to finance redundancies in order to scale down Britain's capacity for building warships.

It is also said to show the BVT Surface Fleet chief executive, Alan Johnston, forecasting savings of up to £0.5bn from the closure of two out of the three yards after the contract for two aircraft carriers ends in 2014.

A BVT spokesman said he could "not deny" that a memo existed, but added that the company was not expecting to close any facilities in the "foreseeable" future.

"As a business, we plan for all sorts of scenarios, both good and bad," he added.

"BVT Surface Fleet has a solid order book for the next seven to eight years and is in the strongest position that the shipbuilding industry in the UK has seen for a generation.

"As part of its prudent long-term planning, it considers a broad range of options, including worst case scenario planning.

"However, it is also planning for and confident in an extremely positive outlook."

A spokesman for the Ministry of Defence said it had "been in discussion with the shipbuilding industry over the opportunities for long-term partnering arrangements which incentivise industry to drive down costs".

"Negotiations with industry partners are still ongoing and no decisions have been taken," the spokesman added. "Therefore, it would be inappropriate to comment further."

Tavish Scott, the leader of the Scottish Liberal Democrats, called on the government to "immediately end the uncertainty surrounding the future of naval shipyards on the Clyde".

"They cannot leave hard working men and woman high and dry without knowing their future," he said.

"The government must make an urgent statement on this potentially devastating news for Scotland."

Nicola Sturgeon, the MSP for Govan and Scotland's deputy first minister, said: "These reports will cause deep concern among the workforce and communities on the Clyde.

"I will be contacting BVT to demand assurances over their commitment to the Clyde yards and the long term future of Scotland's shipbuilding expertise."

BVT Surface Fleet, which was created in early 2008, brings together the surface warship building operations of BAE Systems and the VT Group, including their joint venture, Fleet Support Limited.

Its is our defence, our protection, and the lives of our service people who are at risk.
Coupled with the 1000's of employees who work supporting the various arms of the defence industry.

Again the lies the spin, the party of the people, the party of improving services, the party best to lead us out of the recession again shows it utter contempt for the UK as a whole.
Posted by The Last Of The Few at 10:14