The economy is over the worst and Labour did it......puke 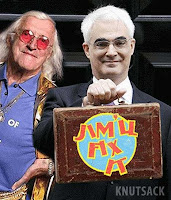 Gordon Brown is hoping to convince voters that the British economy is through the worst — and that it was a Labour Government got us through it.

And if you believe that they al-Megrahi was just a compassionate release and Afghanistan is winnable.

Mr Darling said yesterday that he expected the British economy to start growing again around the end of this year — as a result of measures such as the bank bailouts, emergency tax cuts and the fiscal stimulus package.

Even if this is correct economists widely expect unemployment to continue to rise, peaking at about 3 million next year from the current 2.38 million.

Alistair Darling, who is hosting the meeting, will try to ensure greater international co-operation in response to the banking crisis.

Mr Darling will also have to address the issue of executive bonuses — Nicolas Sarkozy, the French President, has already been seeking support from Angela Merkel, the German Chancellor, to introduce global rules on rewards for traders. Mr Sarkozy is trying to push the issue high on the agenda of the G20 summit in Pittsburgh later this month.

But if you look at it both France and Germany have a manufacturing base far greater than ours. There dependancy upon financial trading is a damn site less than the UK's so whats the betting thats a non starter then?????