When Will we need the IMF 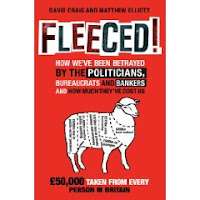 And personally if you look at the meaning of "bankrupt" and as per its meaning compare it to todays position i.e cash v cash out with assets .............you get my meaning......I think we are bankrupt now.

Well a report by the Tax Payer Alliance states that around £1.5 trillion of taxpayers' money has been squandered on an acceleration in Government spending fuelled by the economic boom, while another £1.5 trillion has evaporated in measures to tackle the recession, according to the research.

The authors claim that Government spending has more than doubled in real terms since 1997, to the extent that even if the next government tries to trim spending by 5-10 per cent, it will take years, probably even decades, to bring it back under control, and could cost upwards of a further £1 trillion.

One of the authors, Matthew Elliott, founder and chief executive of TaxPayers' Alliance, said: ''It would be easy to dismiss the figure of £3 trillion as being too big to contemplate or unreasonably high, but to do so would be to ignore the sheer scale of the financial disaster that 12 years of Gordon Brown's tax-a-lot and spend-more policies have done to the British economy.

''In the light of our analysis, £3 trillion is actually a best possible scenario and relies upon the UK making a far quicker recovery than most expect.''

Mr Elliott and management consultant David Craig say that by the end of the 2009-10 financial year, the present Government will have spent almost £1.7 trillion more in cash terms (about £1.35 trillion when adjusted for inflation) than would have been spent had Mr Brown and his colleagues kept public spending at the previous levels.

''Adding in more than £150 billion in Private Finance Initiative (PFI) projects and other schemes which the Government has kept off its balance sheet through various creative accounting techniques, you're almost up to £2 trillion in cash terms or £1.5 trillion after taking inflation into account,'' they say.

Mr Brown has taken public spending to the level reached by Harold Wilson and James Callaghan in 1976 - when the country went bankrupt and needed the IMF to bail it out, they say.

So what was that report about green shoots of recovery and coming out of recession last week.
Best get Mandleson on the case...............ooops cant he is still reading his gay porn.....see here
Posted by The Last Of The Few at 14:07