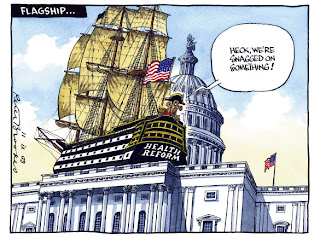 So the elected Saviour of the World (note the word elected....Yes Gordon he is) ran into a bit of a controversial issue on Weds.

During his speech to a joint session i.e. Both the Senate and the House of Reps an individual called out that he was a Liar.

Now he was in his speech on health reform.

I have a great great friend in Iowa who keeps me abreast of all things US of A and well the health reforms is a bit of a sore subject.

We are all aware that the US is predominantly a private health care system. There are lots of critics of this system, lots of cash buys health, elite doctors yada yada.

A lot of worry exists that as the revenue will be collected via a tax system is that the potential exists for the abuse by illegal immigrants as per the NHS. And the great American public dont want to pay for that.

Personally I can empathise with that position.

The comment was said by a Republican called Joe Wilson from South Carolina. Wilson has apologised (see here) and now his future is potentially at stake(see here).

The basis is that the shock of the outburst rocked the house. It is a given that in US politics the President is applauded by all sides of the house and that definately a higher level of decorum is observed than British Politics. Anyone watching that complete farce that is PMQ's will notice the childish actions of the 646 club no matter which side of the house they are on.
The president is held in a special regard.

So the question I ask is and it is gonna cause some controversy............Bush was a cretin......but got the respect his position showed, Already Obama has been a victim of unheard of before controversy in this so...........is it partly because he is black??????

I mean the US has dealt with political change bigger than health reform before and nothing like this has happened.
The US still has a huge issue with people of colour.

H/T Peter Brooke for the cartoon
Posted by The Last Of The Few at 10:04

My humble opinion is that I don't think race has anything to do with this outburst, health care is such an emotionally charged issue in the U.S. because of the enormous changes in the population from boomers being the largest age group to an influx of immigrants to masses now unemployed and not able to pay for their healthcare. It was a perfect storm for healthcare reform talk, all these factors have come together at a time like none before.

Health care reform has been a pet project of the wealthy for many years, people too far from the issues to really understand which is probably why nothing has really changed except the cost getting higher and higher.

And everyone seems to forget that the elected savior is only half black...not a racial comment but just a fact.

Actually Wilson's outburst might be more tomato motivated...maybe he's one of the congressmen who got hit with a particulary emotional and expressive townhall meeting!LOL