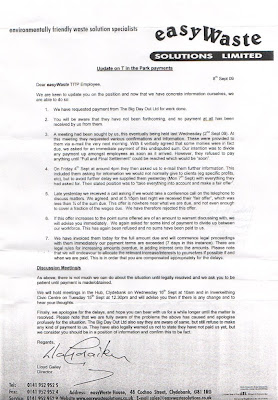 Hundreds of workers who cleaned up after T in the Park demanded their wages at an angry meeting last night.

Easywaste Solutions employees lived in tents for up to five weeks while tidying up after the music festival.

But boss Lloyd Gailey is refusing to pay them because he is in a dispute with festival organisers Big Day Out.

"We spent weeks up there grafting to make sure the festival site was returned to its original state.

"We were sleeping in tents in the pouring rain for weeks to get the job done. Now we are left with nothing.

"It is a disgrace. My family are going to suffer because of this. I am a bricklayer by trade but I was made redundant a few months ago and I took this job on because I was desperate for cash."

Dad-of-two Robert was one of dozens of workers who met Easywaste boss Gailey yesterday to demand payment.

He said: "Quite a few were unemployed and signed off getting benefits for the period of the job, so they are now being left with absolutely nothing.

"I understand that Easywaste have an issue with Big Day Out but I don't see why that should affect us. I made an agreement to work for Easywaste and I would expect them to honour that.

"They are a big company and they can afford to pay my wages."

Some workers on a rate of £6 an hour are due more than £1500 after working at the site in Balado, Kinross, for five weeks.

But Gailey, 48, said: "We have not been paid what we are owed by Big Day Out and so we cannot pay the workers.

"Lots of these guys were unemployed anyway so this was just a wee extra for them."

A spokeswoman for Big Day Out insisted: "Easywaste did not fulfil the terms of their contract and a significant resource was diverted to other suppliers by Big Day Out to rectify this situation.

"We hope the contracts that these individuals have with Easywaste Solutions will be honoured."


The letter that Easywaste sent to its casual employees is scanned as an image on this post.

But as a bit of advice to Easywaste. Your employment contract with your employees can not be linked direct to the contract with "Big Day Out".
As emplyees they fullfilled their contract by turning up and working.
Legally you have to pay them.
If you cant pay them due to cash worries then you will have to declare yourself bankrupt.

All it needs is 1 employee to file against them for bankruptcy and watch them cough up cash quick style. I urge 1 of the employees to do this.

It would be interesting to see what the dispute between Big Day Out and Easywaste is.

Lloyd Gailey was quoted wrongly on this post. Get your facts right.