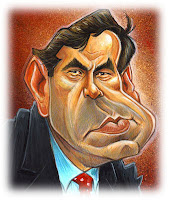 There is a G20 meeting in Pittsburgh next month.
Our Gordon would no doubt have been looking forward to not only a nice wee meal but perhaps a bit of praise for his hosting of the London G20.

However recent events have made me think otherwise.

What I do find particularly gaulling is the tight lipped not a sound blanking we are getting.

Lets be honest Brown did write to Gaddaffi and ask for a low key return of Al-Megrahi.............and of course we all know the results of that request.

This is a case of the silence is deafening.
Ok his spiritual mentour in Mandyis having some reconstructive surgery so perhaps Gordon coach is unavailable to assist.

Brown did write a letter to the ashes winning team on Sunday to give congratulations.
Maybe Sarah has damaged the remote and the TV is stuck on sports channels!!!!!

But when fellow Westminster bodies are using terms like “It is inexplicable and cowardly. The silence of the Prime Minister is unforgivable on an issue of such national importance.”

Others are warning about the continued silence on international relations with the United States in particular.


Now I blogged re "The Special Relationship earlier and its potential to have been a factor in the high death toll in Afghanistan. The special relationship has been on the wayne for a while now. I personally see no real reason to maintain it as the way it is described. we have paid all the WW2 monies back!!!

I suggest you stay at home gordon. You are going to get pelters if you go.
Playboy Prince Andrew just knocked his Libya trade mission on the head.
Mandy did all the work for him!!!
Suggest you do the same!!!
Posted by The Last Of The Few at 10:32