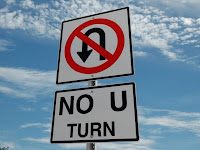 It had to be a help.

It looks like Blinky Balls is about to signal a climbdown on the CRB vetting system.

See here for original post and links to others.

Ed Balls, the Children’s Secretary, said it was "tremendously important" to ensure the “right balance” had been struck and was relevant to “real life”, as reported in the Times.

It paves the way for yet another policy reversal by the Government following embarrassing climbdowns over the 10p tax, Gurkhas, compensation for wounded soldiers, Libyan compensation for IRA victims and ID cards.

The review comes after intense criticism that the new vetting regime, which will affect at least one in four adults, is “overkill” with anyone having formal contact with children for as little as once a month falling under its scope.

That includes parents who ferry their children’s friends to and from clubs or events, such as Scouts or football, on a formal basis.

Chris Huhne, the Liberal Democrat home affairs spokesman, said: “The safety of children must always be paramount, but when a scheme designed to protect them is criticised from all quarters, including children's charities, it is clear that it has gone too far.