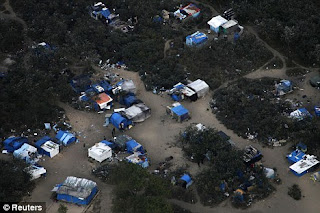 I am being sarcastic here.

What I am saying is that this wee green Isle of ours had best be prepared for a huge group of illegal immigrants arriving if the French and UN have there way!!!

High Commissioner for Refugees Antonio Guterres said the British government should be prepared to allow migrants with large families already in the UK to enter the country.

France has vowed to send in its army and riot police to raze the migrant camp at Calais, known as The Jungle, by the end of next week.

Immigration minister Eric Besson firmly told those using the camp: 'You will not get to England any more via Calais.'
However Mr Guterres told the BBC: 'There will be situations in which we would recommend the British authorities consider the possibility, within reason, of receiving, for instance, people who have large families in Britain and things of this sort.

'What I believe is important is that everybody that is in need of protection should be granted protection.'

No what this cretim is actually saying is bugger off out of France and go to the UK because there welfare state will be nicer to you than the 1 we have here in France.


The UK Border Agency told the BBC that details of the closure were 'matters for the French government'.
The camp has replaced official centres like Sangatte as a gathering point for migrants hoping to cross to Britain.
Riot police have already taken up positions around the 'Jungle' in preparation for the assault.


The camp's demolition is expected on Monday or Tuesday, at the end of the holy Islamic month of Ramadan.
'The majority of people living in the camp are Muslims and we would not want to offend them by launching our raid during Ramadan,' said an officer.

At present about 800 mainly Iraqi and Afghan immigrants live on the lawless patch of waste ground, waiting to board Dover-bound trains and lorries illegally.

Mr Besson said the problem of where to put the displaced migrants would be solved by 'individual solutions'.

By this he said he meant forced repatriation, an asylum claim in France, or a voluntary return to their country of origin.
But he made it clear the tough action was necessary only because Britain was so soft on immigration.

'The paradoxical situation in which France finds itself is that we're trying to protect entry to the United Kingdom,' said Mr Besson, adding that some 2,000 foreigners living rough in the Calais area was the result.
He said Britain's generous welfare benefits encourage migrants from all over the world to use his country as a springboard to cross the Channel

A few damning statement there me thinks!!

Still plenty of replacement cleaners for Ms Scotland to choose from.