Which Lady says "size does not matter" 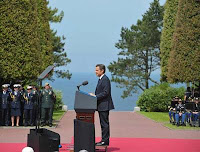 Twenty short people were ordered to stand behind Nicolas Sarkozy so as to make him look taller while delivering a keynote televised speech.

They were bused in after being 'vetted' by aides of the French President who made sure none were taller than his own height of 5ft 5ins.

Mr Sarkozy looked far more statuesque than usual as he posed in front of the large group of white coated technicians on a specially erected stage.

In scenes being broadcast across France today, a woman researcher admits on camera that she was chosen because of her small size.

Asked by a TV journalist if it was necessary for her to be no taller than the President's 5ft 5ins - a height which rises to around 5ft 7ins thanks to his trademark stacked heels - she clearly replies: 'There you have it.'

Pictures are then shown of the 20 workers on board a coach which brought them in from other parts of the three mile square Faurecia site.

All admitted that they were among the smallest members of the 1400-strong Faurecia workforce, and had been selected to replace the usual workers in the unit where Mr Sarkozy made his speech about the car industry.

Mr Sarkozy, is notoriously sensitive about his height, did not want a repeat of the fiasco in June when he was caught using a footstool when delivering a speech alongside Gordon Brown and Barak Obama on one of Normandy's nearby D-Day beaches.

Sarkozy must have great calves from standing on his tippy toes all the time, maybe that's why he looks grouchy quite a bit of the time...and Mrs. Obama has the right idea, just lay it on the line when it comes to size. Tell everyone what you are getting and make other first ladies jealous!