Is that not an Advert for Prozac or What??? 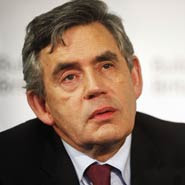 LotF, you've gone missing from my blogroll, so I'm off to reinstate you.

I've a better photo of him, I'll use it sometime. :) But so right, the man looks ill and sounds it too.

Someone pass him the pills.

It's an advert for abstaining from Prozac!

It's just lack of sleep, could you sleep knowing you had destroyed the UK's finances.

Not just the UK's finances but the UK itself. This in itself is quite a feat, but they managed so a pat on the back for the next Labour supporter you see (if you do). Or a kick in the face for being so fucking ignorant.