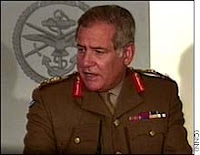 Yesterday in the Times Lord Guthrie wrote an article.

Lord Guthrie was probably the best Chief of the Defence Staff to ever oversee British armed forces. See Here.

His attack in the paper was savage.
He wrote.........substantial budget waste. He said the “insufficient needs” in Afghanistan was explained by the size and structure of the MoD, he argues with 87,000 civilian staff employed for 175, 000 servicemen

“At the head of this unwieldy edifice are six ministers, each enjoying a private office and their own staff - six private empires, with their own turf to be jealously guarded. Sadly, bigger does not mean more efficient; usually quite the opposite.”

He highlighted the lack of military experience among civil servants who were “parachuted in to lead this complex department with little idea of how it works”. Few high calibre people existed in a “dumbed down” Civil Service.

He reserves his venom for the numerous “special advisers” who have dominated government “who confuse the chain of command and wield huge power in unscrupulous ways”.

“Yet ministers are sometimes more comfortable with these inexperienced young people than with senior staff,”.

Instead of being strident ministers are “frozen with indecision” and terrified of making mistakes that leads to delay and “insurmountable financial problems”.

He was critical too of Whitehall’s failure to recognise that “Britain is at war” with politicians believing it was “another day of awkward things happening in far away places”.

The conflicts are only seen as “inconvenient blips” that had to be “muddled through until things return to normal”.

In his still unpublished report Bernard Gray, commissioned to examine MoD profligacy, says that “political fudge” in the MoD has been responsible for more than £35 billion wasted in equipment projects that are constantly delayed.

The full and complete article is here. Get a coffee and have a read.......superb!!

Politicians ordered the Army into Iraq and Afghanistan, but they did not give soldiers the wherewithal to succeed. Gordon Brown writes about courage, and can be eloquent and sincere when expressing sympathy for bereaved Service families, but words are not enough.
Posted by The Last Of The Few at 09:29