Who do we believe?? 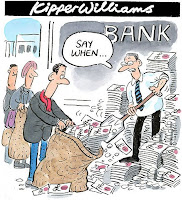 We have all seen the latest headlines over the past couple of days.

For eg
Car sales soar by 2.4% thanks to scrappage scheme
House prices rise by 1.1% in July

However,
The Bank of England today poured cold water on early signs that the UK's fragile economy is recovering as it extended its 'quantitative easing' scheme by £50 billion. The surprise move to extend the programme to £175billion shows that the Bank is cautious about an economic recovery despite a raft of recent positive figures.

So just to confirm the Zimbabwe type policy of just printing money has pumped £175 Billion into our economy.

And also to confirm the BoE can not just do that without it being rubber stamped by number 11.

At some point despite our outrageous levels of borrowing...........this 175 Billion has to be returned.

The Bank's ratesetters also decided to keep interest rates on hold at 0.5 per cent, as was widely predicted in the City.

In a statement explaining the decision, the Bank said the recession 'appears to have been deeper than previously thought'.

While the pace of decline has slowed and business surveys suggested the low point in activity was 'close at hand', money growth remains weak, the Bank said.
The news sent the pound down by almost a cent against the dollar.

Financial Secretary to the Treasury Stephen Timms said there was a 'growing sense of optimism' about the economy but conceded there remained a 'great deal of uncertainty'.

Timms......you have to be having a laugh with that statement. A group of experts have also warned that up to 400,000 households could default on their mortgages.

Another report says we could hit 3.5 million unemployed by 2011.

So who do we believe?

We are no where near the end of it despite what Robert Pestons Labour loving comments on the BBC state.
We are not even half way.
Posted by The Last Of The Few at 14:37

I agree. I don't believe anything the government puts out - not least because it has a 12-year history of lying.

This money-pumping exercise is exceedingly dangerous because King can only put the squeeze on the money supply *after* it has become apparent that inflation is taking hold, unless he pre-empts it via an 'educated guess'.

Unemployment will probably continue to rise well into 2011 and more to the point, employment being a lagging indicator means that firms won't start hiring until they're absolutely sure that the economy is on the mend - probably in early 2012. With taxation set to rise, it is exceedingly unlikely that people out of work will attempt to start their own businesses, as the tax climate will be too uncertain.

Due to the fractional reserve system, over the last 12 years, there has been far more money in circulation than backed by assets - actual values of assets were far below what the inflated money supply priced them at.

So shares which had a 'value' of say £5 in 2007 were probably worth about a fifth of that.

It's quite possible that shares are now at their true value, IMHO.