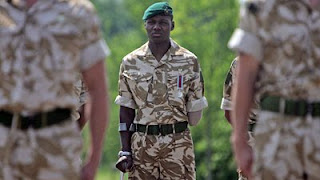 In another example of scandalous government policy it has transpired that a young Marine is fighting to have his compensation increased as a result of injury he received in Afghanistan.

Marine Ben McBean, of 40 Commando Royal Marines, lost an arm and a leg in a landmine explosion while on routine patrol in Helmand Province in February last year.

He also suffered multiple shrapnel wounds and burns that have scarred his body.

The Ministry of Defence had offered the 22-year-old compensation for only eight of his injuries - and for six of those he was awarded the minimum tariff.

Now lets put this into perspective shall we.

£281,151.00 for that level of injury.
And that after the public got involved.
6 of the injuries he received got him MINIMUM payout..........MINIMUM.
Legal experts believe a civilian court would have awarded him more than £1m if he suffered the same injuries.

Recent civil cases brought against the MoD have resulted in much bigger payouts including £2m for an Iraqi teenager paralysed by a British bullet and £484,000 for an RAF typist who suffered repetitive strain injury. Nearly twice what Ben received........TWICE.

Marine McBean's lawyer is expected to argue that the MoD only looked at his injuries individually and did not take into account the disabling affect of the sum total, nor the potential for deterioration over time.

The Royal British Legion is representing Marine McBean at his appeal at a tribunal at Plymouth Magistrates' Court.

It said there is a need for MoD payouts to be "interpreted in a spirit of gratitude and generosity, not with an anxious eye to the Treasury".

The charity's director general Chris Simpkins said: "It is terribly sad that this brave young Royal Marine should feel dissatisfied with his compensation for injuries incurred in selfless service to his country.

"We're going to do our best for Marine McBean, but we need to be realistic - the appeal tribunal's decision will be limited by the Armed Forces' Compensation Scheme and we believe this scheme is unfair."

Under the MoD's existing compensation scheme, lump sum payments for the most serious injuries are capped at £570,000, although the scheme is being reviewed.


Ben initially came to the fore as he was returned to the UK on the same flight as Prince Harry.
Posted by The Last Of The Few at 10:19

It's really horrifying how the MoD are treating the injured.

This man's life will never be the same again and they give him just over 1/4 million. His needs will be far greater than the average persons and he'll possibly have to pay privately for decent help.

Its when compared to the typist.
Still stunned by it!!!