Scotland to gift two ‘NEDS’ to China in return for pandas 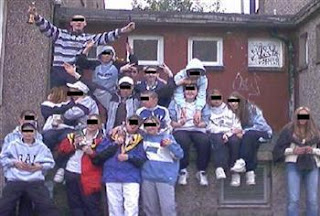 Scottish First Minister Alex Salmond today signed an historic agreement to send two giant Scottish neds (non-educated delinquents, indigenous to shopping centres across the nation) to the People’s Republic of China. The gesture from the Scottish government is said to be a demonstration of the gratitude of the nation for the loan of two pandas to Edinburgh Zoo, and will see these two particular Scottish neds leave the country for the first time since an infamous trip to Ibiza in 2001.

The pair, named Shuggie and Senga, are breeding neds who are expected to produce a near endless litter of cubs or ‘weans’. Traditionally, the only neds conceived or born overseas have been in Spain, but Grant McDougall, Professor of Ned Studies at the University of Dundee, explained: ‘Neds actually breed very easily in captivity, which is why they are rarely allowed to share a cell.’

The neds will be under the custodianship of the Chinese Wildlife Conservation Association, who have turned a former monkey house into a suitable ‘nedquarters’.

‘We’ve put in a top of the range plasma screen,’ said keeper Tian Lee, ‘and there are mobile phones so the parents can communicate with their young. Greggs, the sponsors of the programme, will ensure that the neds are able to enjoy their staple diet of Irn Bru and pies, and we also have a wide selection of takeaway menus available should they decide to get a film out.’

‘If you close your eyes and face away from the bars you’d get almost no sense that this was once a monkey enclosure, although we have left the tyre on a rope. We reckon that’ll come in handy till we get their Kinect hooked up, though we understand there’s a risk it’ll be stolen, joyridden around the enclosure and then torched.’

Not everyone has welcomed the decision though, with wildlife campaigners and other people in pullovers expressing welfare concerns. ‘Neds are pack animals,’ protested Sophie Greenwood, a ned psychologist. ‘Out of their natural habitat it is likely that these two lone neds will simply pull their caps down and sit hunkered in a corner of their cage, looking shifty.’

A spokesperson for the Scottish government dismissed suggestions the neds would find it hard to adjust to life in China, insisting that both neds were very excited about visiting the country where their colourful trainers are made.
Posted by The Last Of The Few at 11:54

Ah fucken lolled, so ah did.