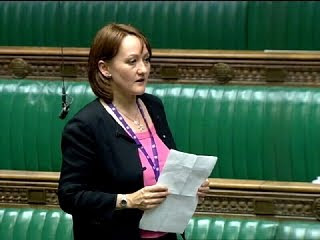 Its nothing to do with the Labour Party.
That's too easy.

Many Labour Party members actually impress me as individuals........but I do tend to think the bulk of them have since retired from Politics now.

She got off lightly with her election antics on the postal vote in Bristol.

No..........there is something about the Twitter Witch that would mean I would not be able to stop slapping her until the Police dragged me off in handcuffs.

Old news now but the fact she has once again shown her colours of raging stupidity by stating that all men in the Greater Bristol Area should be DNA tested to assist in the hunt for Joanna Yeates killer.

Now....a hideous crime and I for 1 hope the boys in blue catch whoever did this and they face the full weight of the law.

OK lets look at that further shall we............or in this case Al Jahom has written a top piece and I quote.

If a man were to refuse to submit to DNA testing, does McCarthy think he should be arrested, and if so, on what charge?

On what basis can McCarthy assume that no woman was involved in this crime, which she must since she only wants men to be DNA tested?

Why so certain that the culprit(s) live in the Bristol area?

And now, let’s consider the likely costs and logistics of such a scheme.

250,000 men to be DNA tested.
I’m going to take a blind guess at the cost of £600 per test, based on the cost of the lab work, as well as police time, administration etc.
(I have to assume significant police time would be involved in collecting and processing samples, due to the requirements of the rules of evidence, in the event of any prosecution based on a DNA match.)

But how long would this ambitious endeavour take?

Not an easy question to answer, but consider the bottlenecks:

Locations for collecting samples.
Space to properly store samples.
Police officers available for collection and processing work.
Capacity of laboratories to work accurately and consistently on the samples.
This last one is a particularly interesting one, since it’s been shown that different labs can easily return different results based on samples of the same DNA, that there are flaws in the process, and miscarriages of justice as a result, that the human element always introduces some degree of error, and that there are intrinsic statistical reasons why accuracy of testing will diminish across a larger sample group.

From 250,000 men, the police could still end up with a shortlist of thousands.

So how long would it all take? 1 year? 5 years? Well… finger in the air again:

240 working days a year. 1000 samples processed a day. 250 days – just over a year.
But…1000 samples a day? Hardly possible, is it? To collect that many, let alone process them, is absurd.
So lets say 200 samples a day. That means the process could take over 5 years.
Will the police sit on their hands, waiting for a 5 year process to come up with a shortlist of (say) 2,500 men?

So, in conclusion, can we agree that Kerry McCarthy is a fucking idiot?

You are not harvesting my DNA to hold on records "Just In Case".

This is a free country and we remain free until proven in court we should not be!!!!!!

People have died and continue to die for that right !


1 additional question............what you going to do with all the DNA samples and records after the killer is caught???

Our previous government before this coalition mob had grand ideas about the ID card and the kiddies DNA base from birth.

I opposed both of them and as much as I hope Joanna's killer is caught soonest this particular idea shows a lack of thought and unreasoned argument beyond even that I thought this dull mare could come up with.
Posted by The Last Of The Few at 10:37

I agree with you on this. Why should DNA be taken off innocent men of Bristol, who is to say it was not a woman who committed this horrendous crime or someone from another part of the UK or indeed a tourist who now is at home in another part of the world? If the offender is not found in Bristol will the DNA net spread across the UK? Scary stuff as I believe DNA should not be taken as blanket coverage for attempting to solve a crime.
If I was a Bristol man and refused to give DNA because I am innocent then I know the ultimate sanction would be for me to be arrested and my DNA taken by force (the arrest would be nothing but the way to forcibly to take DNA) and a stain would be forever on my record and MY character for being arrested on suspicion of murder but then I would have to ask which is the greater crime, that of the offender or of the system to forcibly take after arrest, innocent peoples DNA for purely simplistic reasons that such DNA may catch the offender that would not be destroyed after the case was solved.
I also wonder if I will now be on a data base as a thought criminal who commits doublespeak for failing to agree that any calls for giving my DNA voluntarily when completely innocent of any crime.
H&F

DNA testing by way of oral swabs is by far the standard procedure of sample collection as it's really quick to perform; nevertheless DNA tests, such as paternity testing.
DNA Testing