The Boy Is A Legal Genius

A college student claims he was traumatized by a underwhelming session with a Las Vegas prostitute — and now he’s suing her escort service for distress caused by the "tragic event."

Hubert Blackman of New York would like his $275 payment to Las Vegas Exclusive Personals back, according to court documents, as well as a $1.8 million verdict.

According to the Las Vegas Sun, Blackman was vacationing in Vegas in December when he ordered a stripper to come to his hotel room. There, the stripper performed a $155 lap dance and a $120 sex act. But then things took a turn for the bizarre.

[Blackman] said that the next morning, he called Las Vegas Exclusive Personals to demand his money back, saying he was dissatisfied because the entertainer didn’t stay for the promised one hour and left after a half hour.

Blackman said he also told the company he was incapable of making an informed agreement with the stripper because he was drunk at the time.
When the company refused to refund Blackman’s money, he called the cops, who threatened to bust him for prostitution.

Blackman told the Sun he didn’t know that the trade was illegal in Vegas. 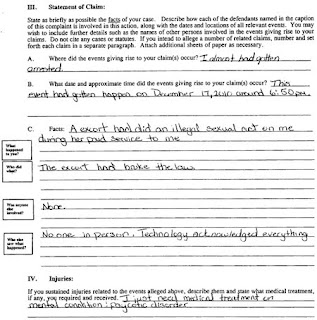 If it was not so funny it would be plain stupid.

Auch that made my day. Thickos everywhere aren't there.

what college in ny does this genius attend? it's not in any report-thanks