Born in Alloway, Ayrshire, in 1759 to William Burness, a poor tenant farmer, and Agnes Broun, Robert Burns was the eldest of seven. He spent his youth working his father's farm, but in spite of his poverty he was extremely well read - at the insistence of his father, who employed a tutor for Robert and younger brother Gilbert. At 15 Robert was the principal worker on the farm and this prompted him to start writing in an attempt to find "some kind of counterpoise for his circumstances." It was at this tender age that Burns penned his first verse, "My Handsome Nell", which was an ode to the other subjects that dominated his life, namely scotch and women.

When his father died in 1784, Robert and his brother became partners in the farm. However, Robert was more interested in the romantic nature of poetry than the arduous graft of ploughing and, having had some misadventures with the ladies (resulting in several illegitimate children, including twins to the woman who would become his wife, Jean Armour), he planned to escape to the safer, sunnier climes of the West Indies.

However, at the point of abandoning farming, his first collection "Poems- Chiefly in the Scottish Dialect - Kilmarnock Edition" (a set of poems essentially based on a broken love affair), was published and received much critical acclaim. This, together with pride of parenthood, made him stay in Scotland. He moved around the country, eventually arriving in Edinburgh, where he mingled in the illustrious circles of the artists and writers who were agog at the "Ploughman Poet."

In a matter of weeks he was transformed from local hero to a national celebrity, fussed over by the Edinburgh literati of the day, and Jean Armour's father allowed her to marry him, now that he was no longer a lowly wordsmith. Alas, the trappings of fame did not bring fortune and he took up a job as an exciseman to supplement the meagre income. Whilst collecting taxes he continued to write, contributing songs to the likes of James Johnston's "Scot's Musical Museum" and George Thomson's "Select Collection of Original Scottish Airs." In all, more than 400 of Burns' songs are still in existence.

The last years of Burns' life were devoted to penning great poetic masterpieces such as The Lea Rig, Tam O'Shanter and a Red, Red Rose. He died aged 37 of heart disease exacerbated by the hard manual work he undertook when he was young. His death occurred on the same day as his wife Jean gave birth to his last son, Maxwell.

On the day of his burial more than 10,000 people came to watch and pay their respects. However, his popularity then was nothing compared to the heights it has reached since.

On the anniversary of his birth, Scots both at home and abroad celebrate Robert Burns with a supper, where they address the haggis, the ladies and whisky. A celebration which would undoubtedly make him proud. 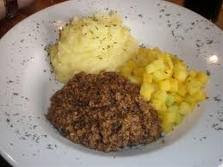 Address to a Haggis.


Fair fa' your honest, sonsie face,
Great chieftain o the puddin'-race!
Aboon them a' ye tak your place,
Painch, tripe, or thairm:
Weel are ye wordy of a grace
As lang's my arm.

The groaning trencher there ye fill,
Your hurdies like a distant hill,
Your pin wad help to mend a mill
In time o need,
While thro your pores the dews distil
Like amber bead.

His knife see rustic Labour dight,
An cut you up wi ready slight,
Trenching your gushing entrails bright,
Like onie ditch;
And then, O what a glorious sight,
Warm-reekin, rich!

Then, horn for horn, they stretch an strive:
Deil tak the hindmost, on they drive,
Till a' their weel-swall'd kytes belyve
Are bent like drums;
The auld Guidman, maist like to rive,
'Bethankit' hums.

Is there that owre his French ragout,
Or olio that wad staw a sow,
Or fricassee wad mak her spew
Wi perfect sconner,
Looks down wi sneering, scornfu view
On sic a dinner?

Poor devil! see him owre his trash,
As feckless as a wither'd rash,
His spindle shank a guid whip-lash,
His nieve a nit:
Thro bloody flood or field to dash,
O how unfit!

But mark the Rustic, haggis-fed,
The trembling earth resounds his tread,
Clap in his walie nieve a blade,
He'll make it whissle;
An legs an arms, an heads will sned,
Like taps o thrissle.

Ye Pow'rs, wha mak mankind your care,
And dish them out their bill o fare,
Auld Scotland wants nae skinking ware
That jaups in luggies:
But, if ye wish her gratefu prayer,
Gie her a Haggis!


And for those of you that do not know what a haggis looks like in the wild.........here is a rare photo. 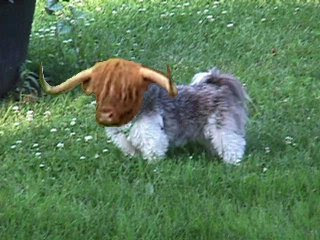