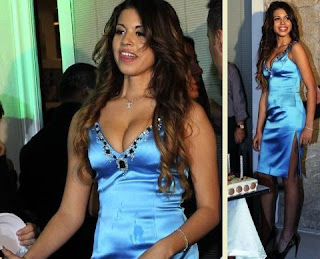 Milan prosecutors are investigating Silvio Berlusconi for graft and aiding and abetting under age prostitution.

An investigation into the prime minister over the case of 'Ruby', an under age prostitute, opened on 21 December 2010. In a note Milan prosecutor Bruti Liberati explained that the crimes are suspected to have been committed in Arcore 'between February and May 2010, the injured party being Karima el Mahroug', otherwise known as Ruby. . .

He is 74, she was a 17 year-old nightclub dancer, she came to one of his parties, for which she says she was paid €7,000 last year. Later when she was arrested Berlusconi called the police and got her sprung. Under Italian law sex with a prostitute under the age of 18 is a criminal offence. She says they didn’t have sex and he says it is laughable and politically motivated left-wing prosecutors are trying to get him.

However a closer look at Ruby's dress may show to me a certain Bill Clinton/Monica Lewinski type piece of incriminating evidence............eeeeewwwwwwww!!!
Posted by The Last Of The Few at 15:16