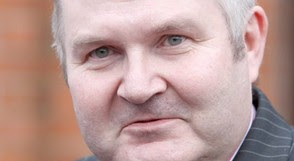 Asks more questions than it answers me thinks ????

Ousted Northern Ireland Water boss Laurence MacKenzie is a convicted embezzler, it has been revealed.
He swindled his church in the Scottish Highlands out of £2,000 almost 30 years ago.

MacKenzie, 49, lost his £250,000-a-year job as head of the state-owned water company in the aftermath of the leaks fiasco which left tens of thousands of homes in Northern Ireland without water over Christmas and the New Year.

He stole the money from West Kirk church in Thurso, Caithness, while he was working for the Bank of Scotland as a junior teller.

A spokesman for the Church of Scotland in Edinburgh said: "We can confirm that, following an investigation, Mr MacKenzie was convicted and removed from his post as treasurer in 1982."

He was convicted of embezzling £2,000 by a court. He was not sent to prison.

A spokesman for NIW said: "We are making no comment."
Posted by The Last Of The Few at 16:58