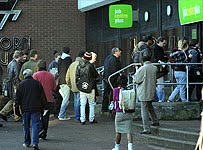 Go to Ollies Blogspot and check this out.

Hat tip to the Red Rag

Figures have been released today which claim to show that the number of people unemployed in the UK has fallen and show a jobless rate of 7.8% with total unemployment standing at 2.45 million for the three months to January. So down 33,000 on the figure for the previous three months.

Well no actually the ONS has the answer "unemployment and employment were both falling because of a rising number of people being classed as economically inactive. This category includes students and those on long-term sick leave, as well as those who have stopped looking for a job.

Ah, so that's it, unemployment has fallen because people have stopped looking for a job. FFS!

The lesson is - with this government - always read the fine print.

The inactivity rate was 21.5 per cent and there were 8.16 million working age inactive people.

8.16 millions represents 24% of the potential workforce.

Factor in spouses, civil servants, local gummint spongers, etc and I bet this would come close to the 30% who say they will vote Labour.

Now you know, the significance of the client state to Labour.

Keep them poor, keep them dependent and harvest their postal votes.