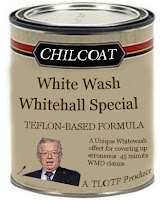 Yesterday at the Chilcot Enquiry we were given the testimony of the former Chair of the JIC, John Scarlett.

For intelligence studies scholars, this is a good moment.

In recent times we have had the Scott Report (1996), Butler (2004) and now this inquiry, which whilst not focussed solely on intelligence will mention it a lot. And even from one days testimony, we can draw some interesting lessons, some of which are now well rehearsed.

1) We went to war despite the evidence(?)

In the absence of a formal transcript from the Inquiry (it was only yesterday) cites have to come from the time-stamps of when evidence was given. At 1502 Scarlett said that intelligence was received stating that Iraq had begun dismantling some of its WMD. He said this wasn’t a ‘game-changing’ moment as it was assumed that this was part of a concealment programme.

We might all note a classic ‘group-think’ and ‘mirroring’ moment here. ‘If I was in Saddam’s shoes, I would do x and y’.

2) That the intelligence cycle was coloured by ‘boss think’(?)

This refers to the practice of finding evidence to fit the hypothesis of a strong voice in the room. It has often been referred to in this context – a decision taken by a small group, in which there is a strong voice. But we might equally apply it to a cascade of the sort of sofa-government that Blair was so fond. If Blair had signed up to the war in March 2002 (as per the testimony of Christopher Meyer two weeks ago) then it stands to reason, in the sofa-government model, that the chair of the JIC would come under indirect pressure (consciously or unconsciously) to be ‘on message’, although at 1625 he denied that he had come under pressure to ‘firm-up’ the dossier. I’m personally not sure it would be possible to be immune from the clearly stated desire of the Prime Minister to steer this course, particularly not in the small and necessarily closed community that formed the Core Executive in the run up to war. This sort of oblique pressure would also be likely to cascade down to the Assessments Staff and interested parties. This sort of cascade and social phenomenon would help to account for the 1502 statement above, and allegations made by the MP Adam Holloway that the so-called 45 minute claim came from an Iraqi taxi driver, and that some MI6 reservations about the intelligence had been ignored.

3) It’s the end-use of intelligence product that’s the problem(?)

The evidence given yesterday seemed to criticise Tony Blair for having given too much emphasis to the notion that the intelligence on WMD was ‘beyond doubt’ and whilst Scarlett said there had been ‘no intention to manipulate the language’ on the so-called 45minute claim (1529), it is clear that it was false and was retracted after the commencement of military actions in March 2003.

I have often thought that intelligence failure is rarely the fault of, or has been rarely caused by intelligence officers – more often than not it has been a wilful or accidental failure of communication between intelligence agencies and their political masters. In this case it seems to have been a fantastic case of boss-think and group-think. And as Chilcot said: “There is a sentence which echoes for me in the prime minister’s foreword: “What I believe the assessed intelligence has established beyond doubt.” I just wonder, recalling that chapter one of the Butler report, whether it is ever possible to say “assessed intelligence has established beyond doubt”.

And that is the nub of all of this. Intelligence product is not fact. Not even when it is rigorously produced. It is a best guess, and a good hypothesis. And what’s more, intelligence and the policies that it informs (or reinforces) are better considered as part of a power-equation than a scientific process. From this limited snap-shot it appears that there were some crucial errors in thinking, and some wilful movements in certain directions – but it would be an error to lay the blame at the door of our intelligence agencies; they didn’t make the decision to go to war, nor did they play – it seems – a big part in it. They were used – rather instrumentally – to convince us of the need for war, and in that it is not just ministers that need to be educated in the use of intelligence, but us too.

Blair woke up this morning and I dont think he had the best nights sleep he has ever had.
Posted by The Last Of The Few at 13:36

Smashing summary LotF. I don't think the intelligence branch will hesitate to hang Blair out to dry if they consider their findings were in any way distorted.

It was a great bit by John Scarlet Rosie.

His wording was so very precise.

Not a hint of waffle in what he said.
and no doubt what he was thinking.