Of all of the world's sports superstars, Tiger Woods has been blessed with one of the more idyllic lives -- a gorgeous wife, two adorable children, multiple millions in the bank, and an image of purity and excellence that transcends the sport he dominates.

But the image, and with it one of the sporting world's premium brands, is under threat as the mystery surrounding his one-car accident, just a few steps from his Florida mansion Friday, deepened as he continued to refuse to talk to authorities.

On Monday, Woods withdrew from his own golf tournament, the Chevron World Challenge, which begins Tuesday in Thousand Oaks, Calif. Woods cited injuries from the crash and said he was "extremely disappointed" he couldn't attend, but didn't elaborate on the injuries.

By skipping the tournament, Woods will escape having to face TV cameras and a horde of media seeking more details about the smashup. The tournament was to be the last of the year for Woods anyway, but he did not say just when he would make his return next year.

In a statement on his website Sunday, Woods called the accident "embarrassing to my family and me" and pleaded for privacy.

"I'm human and I'm not perfect," he said. But, he added, "this is a private matter and I want to keep it that way."

The accident that touched off the cascade of pressure on golf's No. 1 player began at 2:25 a.m. Friday, when Woods backed his black Cadillac Escalade out of his driveway and then ran over a fire hydrant before colliding with a tree on a neighbor's property. The car's front end was badly damaged and Woods' wife, Elin Nordegren, said she used a golf club to bust through a back window to remove him from the vehicle, according to police. He reportedly suffered facial lacerations that required medical care.

But questions arise!
You do not need to be rescued by a woman weilding a golf club when you have a small car bump at approx 10mph.
I mean the airbags didnt go off.
Whats the worst.........scrapped paint, bent bumper, smashed light.
Doors certainly not sealed shut due to the force of impact compressing the chassis and other metallic components.

However this lady has appeared on the radar. 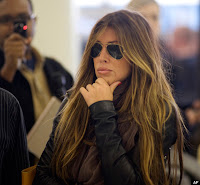 A certain Ms Rachel Uchitel. She is the granddaughter of powerful Cleveland banker and amateur golfer Warner Bishop, and her mom is socialite Susan Bishop.
She left Florida in a whirlwind yesterday and has arrived in LA to be greated by her lawyer.


This post is not about idle gossip.
I dont give a shit about Tiger Woods.
What it is is a gentle push for him to come clean and tidy up his reputation.

One of the greatest sportmen of certainly my generation is about to crash and burn infront of the worlds media.
Perhaps best written here in the times.
Letterman appears to have come out the other side OK.

I think the cartoon at the start of this post summed it up more accurately.

Maybe 1 of my American readers can give us some stateside info.
Posted by The Last Of The Few at 14:27

Tiger's silence is really creating a lot of media hype here in the states. And he’s backed out of his own Charity event, I bet Chevron is mad about that! How awful that his charity is going to suffer because of he can’t put aside his personal problems. He needs to “do a Letterman” and not give media any place to go, end it. We’re all human and unfortunately nowadays no one expects celebrities and professional athletes to be faithful or have high morals…this is what one aspect that is disappointing about this whole debacle to many of his fans; people thought Woods was both of those things. One of the few good, faithful, family men with a happy home life and one of the most successful sports careers on the planet and able to balance them both. Even A-Rod took the media interviews and admitted his use of illegal steroids…and to those who say domestic abuse is not anyone’s business, well, ask OJ Simpson’s ex in-laws about that. Woods made his biggest money from sponsorships for products that mainstream consumers buy which support those massive sponsorship fees so in a way we do deserve a little bit of information even to just say on camera, it’s a family issue we’re working out and not hide behind a blog on his website.