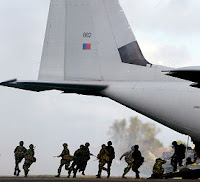 Cathy Newman on Channel 4 News is about to break the news that major defence cuts are on the way. They will be announced next week, including the closure of at latest one RAF base and a scaling back of the British base in Cyprus. The cuts should have been announced in the PBR this week but the MoD couldn't agree the details in time.

According to Channel 4 News...


The cuts have been caused by a six billion pound overspend, mainly on the procurement of new aircraft, submarines and ships. A senior official at the MOD told the programme that the department was in 'real financial trouble.' As well as the closure of an RAF base and the Cyprus reduction, Channel 4 News understands there will also be cuts in IT, human resources and back office functions, and more controversially the MOD Police. Senior Whitehall sources have admitted to Channel 4 News that the futures of the Navy's two new aircraft carriers and the A400M aircraft are in doubt. Defence could face cuts of up to 16% over three years because of the government's decision to half the deficit.


If all this is true, this could dominate the news over the next few days.