In what appears to be a blatant bit of ratings tourism, Question Time tomorrow comes from Wootton Bassett and is set up to be completely devoted to the war in Afghanistan. The panel will consist of former head of the British Army General Sir Richard Dannatt, Shadow Foreign Secretary William Hague, and former News of the Screws editor Piers "Moron" Morgan. Armed Forces Minister Bill Rammell will be on, presumably to shield Bob Ainsworthless from the public, as will Salma Yaqoob, the leader of Respect.

George Galloway has already got his ha'pennyworth in the much ignored Swindon Advertiser saying that the panel is biased in favour of the war, and the local mayor is boycotting it because he wants to talk about something, indeed anything, else. 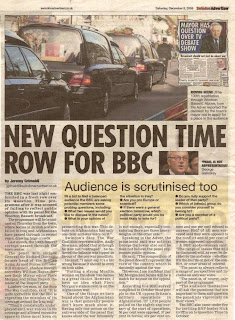 This is appalling really. Of course I'll watch it but did you know the mayor has boycotted it? He wants to speak about anything but the war. As for Bill Rammell and that fool Morgan - haud me back.

Yes I read that Rosie,
But be fair Bill Rammell is better for labour than Bob Ainsworth. Infact the reason hes not on apart from being ueless is the bugger would be linched on the way to the studio.

Very poor judgement shown with this story I think.