Over the death of a serviceman and a letter to his father.

The father of a soldier killed in Afghanistan received a condolence letter from the Prime Minister last month – almost two years after his son died. 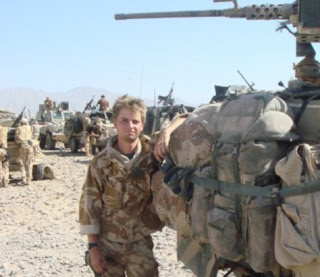 Trooper Jack Sadler, 21, of the Honourable Artillery Company, was killed on December 4, 2007, when his vehicle was hit by a blast in Helmand Province.

But his father Ian said he received a handwritten letter from Gordon Brown only on November 17 2009.

Another example of our governments treatment of servicemen, servicewomen and families
Pure and utter contempt.

I work in a busy office and shit happens. Letters that should have gone out get stuck in a tray only to be found much later.

Let's face it - these letters of condolence are not for the family's benefit are they? I doubt the Gordo's words would have salved trooper Saddler's family's grief and I do not envisage that they were waiting for the postman each morning.

So do you think then that maybe a darker hand was at play.
Maybe an attempt to further reinforce those who inside the Labour pParty want to Gorgon out with an impending GE.