More Piggies at the Trough

You just cant make up the blatant "its within the rules" snout nosed troughing can you.

A Labour baroness has received £150,000 in expenses by renting a country cottage from a Conservative colleague in the Lords and saying it was her main home.

For seven years Baroness Whitaker, a former civil servant, rented the property which is on a driveway leading to Lord Renton’s mansion in the Sussex Downs.

Renton, the former Tory chief whip, only occasionally claims overnight expenses when he has to live in London to attend the House of Lords.

Whitaker has been claiming more than £20,000 a year even though she owns — rather than rents — a £1.5m property in an area of north London where she has lived since the 1960s.

Lords can claim an allowance of £174 per night which is intended to help them meet the cost of accommodation in London if they live outside the capital.

Whitaker insists that her expenses claims were made properly as she had moved out of London to live in the country after her husband retired.

She is a 73-year-old former magistrate who worked for the Health and Safety Executive and was vice-chairwoman of the Independent Television Commission.

When she became a life peer in 1999 she used her home town of Beeston in Nottinghamshire in her title.

She said at the time: “Although I live in London now, I still have an affinity with Nottinghamshire. That’s why I chose to be Baroness Whitaker of Beeston rather than Hampstead.” She and her husband have lived in their flat in north London since 1998. They own two floors in a spacious terraced house. A flat next door sold for £1.7m in July this year.

However, when the Lords first published details of expenses, Whitaker said her main home was in “East Sussex”.

After initially renting a property on the Firle estate near Lewes, which Whitaker designated as her main home, they were offered the use of a three-bedroom cottage owned by Renton. Whitaker’s husband Ben, a former Labour MP, had been a friend of Renton since childhood and they moved in.

They used the cottage, while also living in London, for seven years before switching to another property in Sussex this year. Whitaker had claimed £150,000 in overnight expenses while saying Renton’s cottage was her main home and had claimed another £20,000 while previously renting Firle Tower and the new property.

During this time she and her husband gave their London address to Companies House for their directorships. Company law states that directors must give their “usual” address.

Renton said on Friday he had charged the Whitakers a “fair rent” but would not say how much they paid.

Yesterday Whitaker said she had sold her family home in London and bought the flat nearby when she and her husband were retiring and wished to move to the country.

She wrote: “I use the London flat to attend sittings in the House of Lords, which often go on late into the night, and I spend the rest of the time in Sussex, where my husband lives for most of the week.”

She said she had been on the electoral register in East Sussex since 2000 and was an active member of the local Labour party: “Our home has been in East Sussex for 10 years.”

And the thefts will keep on coming.
What has to happen before the body politic in this country actually sit up and think.........err not a good idea.

I mean the rank hypocrasy.............Bercow another fucking example.
£45K on a grace and favour apartment.
Kiddy friendly.

But being honest I suppose its like comfort eating.
I mean comfort spending.
To take away the pain from realising just how ridiculous the short arse looks next to his wife. 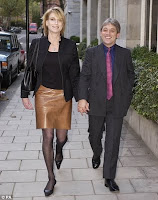