This is wrong in so many ways. 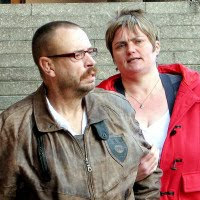 The Cartwrights had claimed a sex Asbo breached their human rights have lost an appeal against the order.

Caroline Cartwright, 48, claims that she is unable to stop the loud shouting and screaming she makes during lovemaking with her husband Steve.

After neighbours, the local postman and a woman taking her child to school complained about the noise, the Cartwrights were hit with a noise abatement notice.

However, when Mrs Cartwright was convicted of breaching the notice, magistrates made her subject of an anti-social behaviour order as well.

She appealed against her conviction for breaching the noise abatement notice and the making of the Asbo, which bans the couple from "shouting, screaming or vocalisation at such a level as to be a statutory nuisance".

Jobless Mrs Cartwright used Article 8 of the Human Rights Act to argue she had a right to "respect for her private and family life". She also claimed that she could not help making the loud noise during sex with her husband.

The hearing at Newcastle Crown Court heard that the Cartwrights' nightly sex sessions at their home in Hall Road, Concord, Washington, Tyne and Wear, were making their neighbours lives' hell. Their lovemaking was described as "murder" and "unnatural" and drowned out their neighbours' televisions. Neighbours said the Cartwrights' sex sessions would usually start around midnight and last for two or three hours, every night of the week, the court heard.

Specialist equipment installed in a neighbour's flat by Sunderland City Council recorded noise levels of between 30 to 40 decibels, with the highest being 47 decibels.

Specialist Equipment............WTF!!!!!! (Excuse the pun)
Who the bloody hell put that in, in the knowledge they were to record people bonking.

Giving evidence, Mrs Cartwright said she was unable to control the noise she made during sex. "I did not understand why people asked me to be quiet because to me it is normal. I didn't understand where they were coming from," she said. "I have tried to minimise the situation by having sex in the morning - not at night - so the noise was not waking anybody. I may be sympathetic to it but it is not something I am doing on purpose."

A judge at Newcastle Crown Court upheld the original conviction and ordered that the Asbo should stay.


I am stunned........I mean fatties, smokers, drinkers, car drivers, light bulbs, the British military to name but a few things criminalised by the government and now loud shaggers!!!!!!!
Posted by The Last Of The Few at 16:56

Jeez LotF, have you never stayed in a hotel with paper-thin walls and the lot behind your bedhead have been going at it all night? I've had that happen so often to the extent that I've bashed on many doors and said 'if you can't have sex without hysteria go see a doctor'.

So it was you banging on my room door???