Scotland’s reward for causing the upset of the weekend and beating world champions South Africa 21-17 is a two-place climb to sixth in the latest IRB World Rankings, their highest ever position since the rankings were introduced in October 2003.

Andy Robinson’s side bounced back from a record loss to New Zealand seven days earlier to taste victory over the Springboks for the first time since 2002 and climb above Ireland and Argentina to better their previous best of seventh achieved with victory over the Pumas in June.

South Africa’s first loss of their European tour means they surrender second spot back to Australia. The Wallabies, who dropped to third after losing to England last weekend, beat 12th ranked Italy 32-14 in Florence but this result did not have any impact on their rating. 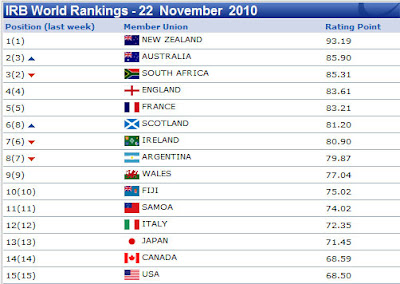 And to think I had slated Andy Robinson 6 ways 'till Sunday when he was appointed.

Long may it continue. Was a superb game.