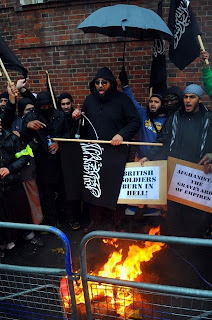 Further coverage with the G.O.T

The MAC are a splinter group of the (supposedly) banned British muslim fanatic organisation, Islam4UK fronted by Anjem Choudray. That'll be him pictured in the black hoody then.

Give me fucking strength.


Many more images and reactions are available in this Daily Mail report, if you can stomach them.

Incidentally, haven't seen any coverage of this on the BBC although I dare say if someone were to burn the quoran or a bunch of lefty fuckwits were to smash up Tory HQ .... it'd be somewhat different, eh.
Posted by The Last Of The Few at 15:59

What scum, do they not realise this wasn't even there war? Maybe we shouldn't of saved them in ww2!. Out of order the lot of them!

I read a comment where the fuckers said WE need to stay out of THEIR business....... send them back the cheeky fucking scumbag twats!!!!

Please tell me this isn't representative of Muslims?

My Polish Grandad did not survive labour camps and fight in WWII to allow this to happen. After the war, he came to this country and worked hard his whole life. What have a group of 'humans' like this done...nothing, that's what.... except show no respect! Do these protestors not understand that had we allowed Germany to win the war, there wouldn't even be an Islamic religion.

And what would happen if a group of Christians burnt the Qur'an?? Is it tolerated....no. This is not a testament of religion or an action of peace. This sickening protest does not deserve the paper it is written on.

Daily Mail shouldn't let 'news' like this overshadow the importance of Rememberance Day. We all owe our lives to the men who fought for what this brilliant country is today. I will always be eternally grateful for such amazing people.

Of course it isn't representative of muslims, these are the actions of a minority of extremist individuals, an overwhelming minority, in fact. I know quite a few muslims, and none of them are proud of the events today,though they also seem a little worried that many of those whe have passed comment from a particular perspective have referred to deportation as a suitable punishment, without any distinction made between "muslims" and "extremist militant muslim organisations",the upshot of which is an influx of apparent racist hatred. I hope this is not representative of the attitude of these individuals.

The reason these guys were at the demonstration and, indeed, why they chose to cause such a stir is because the rememberance day "celebration" is one viewed by vast amounts of people. This is little more than a publicity stunt. It is aimed at the Iraq war. THe attention is not to defecate upon the graves of soldiers from the first, or second world war, it is to draw attention, if you like, to the Iraq and Afghan wars. The civilian muslim casualties in these two countries that have occurred as a direct result of Western intervention, are frightening in terms of numbers. Far more than anything we've lost. This is not to mention the huge collateral damage and the exploitation of resources (oil). While i do not have time to cite any papers or evidence to support or refute my claims, i assure you they can be found easily. The war in Iraq is considered illegal by many.

I understand the importance of national pride to many, but it is important that we do not resort to bigotry so swiftly. I would refer to the author of the articles use of "lefty fuckwits".

Thank you for your comments.

Both lucid and factual.

However the Iraq or Afghanistan conflict is viewed, legal or otherwise the act carried out by the MAC group and a certain Anjam Choudray is viewed by this land as an attack on every serviceman who has lost their life in any conflict.

If they want to protest it is their right however to choose that day and that effigy to deface, meant they knew that the protest would cause a reaction such as this.

They could then justify the persicution arguement and further justify their cause and say that again they are the victim of the big British oppressor.

This same group was the group that wanted to March through Wooton Bassett in protest.

I also ask you to cast your mind back to a certain Quoran burning issue. That act was stopped by pressure from Western Governments to prevent increases in tension.

Sadly our counterparts here in the MAC did not choose to exersice the same values.

I reserve the right on my blog to refer to a group as I see fit. This blog as it says at the top is mine, my opinions etc. I have welcomed your comment.
I have not acted in a bigotory manner to any Muslim.............I have acted in a harsh manner to lefty fuckwits and will continue to do so.

send them all back 2 where they come from......if they dont get sent back, something worse will happen to them. you really think BRITISH PEOPLE will let them get away with that??!!?!
a load of scum, first they say we're racist, thewy take our homes, jobs and money, moun they can smell bacon from a shop and got it shut down!!!!! THIS IS ENGLAND, NOT PAKISTAN. THEY ARE OUR TROUPS OUT THERE RISKING THEIR LIVES TO SAVE OURS AND YOU SHUV IT IN THEIR FACES! go home!!!!!! you dont deserve 2 live here!!!

I refered to your use of "lefty fuckwits" as bigotry because, unlike most of your above comments, it doesn't really sustain any apparent analytic or empirical truth. An explanation of your use of "fuckwit" should be most interesting to read, i look forward to it.

I agree with you to an extent, though i would point out that, had they chosen a day considered less important than this in terms of patriotism, or a poppy of a different colour even, it seems very unlikey that we would be discussing the event at all, it was a publicity stunt, as much a recruitment drive as it is of any real, legislative or political poignance.

As for the Quran burning issue, it's planning was heavily publicised. It is not impossible that political pressure would have snubbed out the poppy incident as well, had it been publicised heavily enough beforehand.

I would also point out that while the MAC attacked a ceremony of memory with fire, the Quran is perhaps, as a holy scripture of such importance to such a huge population, a little deeper even, than a matter of national importance. I don't remember why the burning of the qurans was advocated, i don't even remember what denomination the Church belonged to, and it's 2am... All of those could introduce new arguments.

I remember the Wooton Basset demonstration, more for the furious reaction of the locals, than for the rather docile actions of the extremist muslims.
At least the MAC kept it peaceful eh?

A different interpretation, an adequate defence?


I look forward to your reply!

Christ, i'm tired!
all the best,