Is this country trying to kill me with rage ????

I mean my blood is fucking boiling today.

Alright so at least we havea bit of good news with Phil "Joanna Fucked me over a barrel" Woolas. But the fact is the lying, cheating cash stealing, claiming tampons and ladies clothes on expenses bastard is trying to over turn his 3 year ban with a Judicial review.

We I hope he has a bank account to back that up.

My rage in inscensed by oncvce again the "Human Rights Act"!!

Now old news with regards to being in Jail.

However what I cant accept and what is bringing my blood to the temp of the sun. 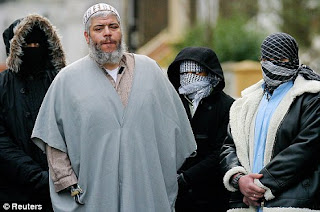 Hate preacher Abu Hamza has won his appeal against the Government's attempts to strip him of his British passport, a special tribunal ruled today.

The radical cleric argued that such a move would render him 'stateless' as he had already been stripped of his Egyptian citizenship.

The hook-handed cleric, who acquired a British passport through marriage, is serving seven years in maximum security Belmarsh Prison after being convicted for inciting murder and racial hatred in 2006.

The Home Office sought to remove the British citizenship he received in 1986 so he could be deported.
In his ruling, Mr Justice Mitting said: 'We are satisfied on balance of probabilities that if a deprivation order were to be made, the appellant (Hamza) would be made stateless.
'The conclusions which we have reached in the closed judgment supplement, but do not contradict, that conclusion.
'Accordingly, this appeal is allowed.'
But the 52-year-old used a high-powered team of lawyers - funded by the taxpayer - to successfully argue his case.

A leading QC and team of lawyers all acted for Hamza, along with a special advocate appointed by the court.

Hamza claimed that he is no longer considered a citizen by Egypt, so taking away his UK nationality would leave him 'stateless' in contravention of Human Rights law.