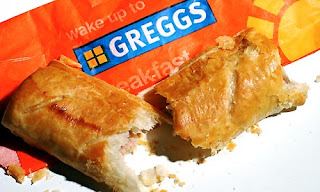 Following on from Prof Nutts revelations that heroin and alcohol are on a par, the Home Secretary Theresa May has come under fire from the Federation of Master Builders after she announced that Greggs pasties are to be reclassified as Class A drugs.

The government has been under intense pressure to act after a series of incidents involving hot savoury products. The Daily Mail has led a vocal public campaign to raise awareness of the threat posed by pies and pasties, linking both to increased cancer risks, rising house prices, and the death of Diana, Princess of Wales in 1997.

Pasty expert Dr John MacDonald of Suffolk University said: ‘These products seem harmless, but the reality is they ruin lives. Pasty use is very common, especially among the building community. Known colloquially as ‘P’ or ‘nom nom’, you can pick up a dose for as little as 79p on any high street. They’re far cheaper than crack, another thing that’s already closely associated with the nation’s builders.’

A spokesperson for Greggs insisted: ‘Our pastry products, especially the sausage rolls, are harmless. There’s nothing wrong with an occasional steak bake or cheese and onion pie. We clearly ask our customers to consume responsibly.’ She refuted allegations that bacon sandwiches are discounted to act as ‘gateways’, enticing customers into buying hardcore pastry products.

However, the move has shocked the construction community, who have argued previously that consumption of Greggs pasties is part of their cultural heritage. They claim the ban is tantamount to discrimination against builders. ‘We defend the use of savouries in a social context,’ said the Federation of Master Builders in a statement. ‘Casual use of pasties hurts nobody. We fund a support programme for Greggs addicts, which has pioneered the use of quiche to overcome the effects of withdrawal. We recognise there is an issue but this heavy-handed approach helps no-one. God help Theresa May if she wants a conservatory built or her boiler breaks down this winter.’
Posted by The Last Of The Few at 16:07

Labels: and not funny, newsbiscuit

This is bloody hilarious.