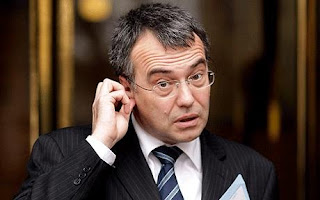 Not only did Joanna Lumley give you your ass on a plate and made you look a total dick but you have now gone on and proven it all by yourself.
In fact you have a history of being a total cock don't you....... see here.

I am referring to the fact Phil Woolas MP for Oldham East and Saddleworth..........err well not anymore has been proven by high court judges in a special court of breaking election law.

Well other may have blogged on this topic as well but what I want to draw attention to is the Judges Actual statement on the verdict.

In particular....."It suggests that he is untrustworthy. The statement was false and the respondent had no reasonable ground for believing it to be true and did not believe it to be true.

"It follows in our judgment that the respondent is guilty of an illegal practice, contrary to section 136 of the Representation of the People Act 1983 with regard to those statements."

Post the appointment of RedED Milliband as leader of the People Popular Front oooops sorry the Labour Party.............Ed also proved himself a total cock as well by making him Shadow Immigration Minister.

Oh the sheer hypocrisy...........Shadow Immigration Minister and a man proven to use race hate as part of a campaign.

A court of judges has proven him to have broken the law!!!!
He played a race card !!!!

Should a complaint be sent to Greater Manchester Police I am sure they would have to carry out a formal investigation.................potential criminal charges !!!!!!

He has been found guilty on two counts of breaking the Representation of the People Act by making false election statements. No appeal, by-election in Oldham imminent.

UPDATE: Labour HQ is silent but the distancing has already begun. Lord Falconer just told the BBC he doesn’t believe that Woolas will be the candidate at the by-election. Red Ed is in a very tricky spot here…

UPDATE II: Woolas is making noises about attempting a Judicial Review. Hope he’s got a pretty penny…
Posted by The Last Of The Few at 13:47

It couldn't have happened to a nicer guy.

If I were he, I'd be looking at my back, en route to the labour Ex for loitering Ghurkas.