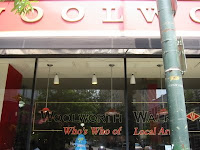 A line from an old TV advert but yes an icon has returned to the high street.
Well no not quite.
Woolworths has returned as a on-line store.

Woolworths has been bought by the shop direct group. Although they declined to say how much other than they paid more than £1.00 for the brand name from the administrators of the now defunked high street icon

Rumours are rife that costs in the region of £10 Million was paid.

Apparently they are specialising on 4 key areas but with a special note that you can still buy the much worshipped pick n mix via an online page on the web site.
Personally I think that has kind of taken the magic away from the whole pick and mix plundering.

But is it really Woolies?
I think not.
Its an extension of the shop direct groups arm and too be honest did they really need spend 10 Million in order to increase there portfolio?

You gotta sell a hell of a lot of pick n mix to get that sort of cash back.

Wollies business model was flawed as modern times progressed.
They had huge cash flow issues.
No supplier would touch them without cash up front.
But shopping direct felt it was an iconic brand that people loved.

They may think that but people shop with their heads, not their hearts anymore. And if it was well loved then it would never have gone bust.
Posted by The Last Of The Few at 15:36