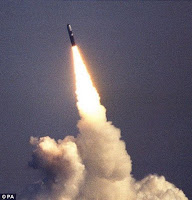 So a strategic report now suggests cuts to defence spending are needed.

So supposed big hitters got invloved in this report such as Paddy Ashdown and former defence chief George Robertson.

In its report for the think tank IPPR, the commission suggests cuts be made to projects to build aircraft carriers, the joint strike fighter, the Type 45 destroyers and the Astute class submarines.

Major innovations are needed to adapt to the "post 9/11 and post recession world", with investment in cyber-warfare and the creation of a joint civilian-military stabilisation and reconstruction taskforce, it says.

It says that Britain should be prepared to put part or all of its nuclear weapons capability on the table as part of international nuclear disarmament negotiations.

The commission also called for a major overhaul of policy making.

Defence Minister Bill Rammell admitted there were "immense challenges" to the funding of defence projects.


Subrosa made a post last night with regards to Gordon Browns re think on Trident.

It is widely known the Labour government has sacrificed the lives of our servicemen in both Afghanistan and Iraq by amongst other things under funding resulting in poor equipment and resources. Their contempt for the British Military is easy to see every day.

Our government is useless in running the defence of this nation.
2 example are
1. 8 Chinook helicopters ata a cost of £422 million pounds being grounded since 2001 because of the wrong radar.
2. The appointment of Bob Ainsworth as a replacement for John Hutton as defence secretary.

We need a startegic defence. We can not rely on the USA.

So lets keep or defence and review regularly.
1. Lets not throw money at useless repatriation programs for asylum seekers who as a result of a million quid being flushed away has help 1 bloody family.
2. Lets get our immigration under control and not throw money at foreign lay abouts who know a good deal when they see it, and will cross continental europe to get to the UK on purpose.
3. Lets revisit the benefits system and encourage people to work not sit on their arse.
4. And above all DO NOT DO NOT invest more billions in a i/d card system that makes the defence budget look like pocket change.

UPDATE Am I good or what. I make a post on my blog and a mere 6 hours later this pops up on the radar.
Posted by The Last Of The Few at 09:31