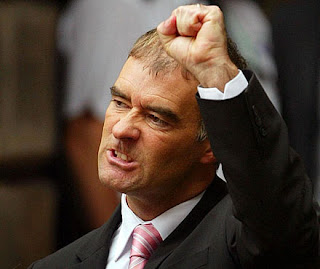 
1. Justice has been served – he brought it upon himself. Sheridan was undoubtedly guilty. Perjury is a serious offence, and has the capacity to seriously damage the criminal justice system – it must be feel the full force of the law and be punished severely. It was not a political trial – it was public money well spent.


2. It was a political trial – a show trial – designed to satisfy News International, Rupert Murdoch, those who detest socialists of whatever ilk, and it was also a valuable smokescreen to cover the much more serious questions hanging over Andy Coulson, former editor of the NotW, now a senior advisor in the ConLib Government, over the phone tapping scandal by the News of the World. Tommy Sheridan is innocent of all the charges brought against him. There was a wide-ranging conspiracy to bring him down, one that included most of his former Scottish Socialist Party colleagues, News International, the Scottish Police and the Scottish justice system.


The truth, as always, probably lies somewhere in between, and that is the area I find myself in, much as I would like to be absolutely clear-cut in my view.

Let’s try to nail a few things down …


Did Tommy Sheridan bring it upon himself?

Leaving aside for the moment the question of his guilt or innocence (the Law has spoken but in a free country we may express our doubts over its verdict), Tommy Sheridan faced two crucial decision points – one when the News of the World’s made allegations about his private life, and the second when the Crown Office launched a prosecution for perjury against him and his wife, Gail Sheridan.

The original choice was to either ignore or contest the NotW allegations. To ignore them would undoubtedly have cost him his leadership of the SSP, and perhaps ultimately his parliamentary seat, but he could have survived that, diminished but not destroyed. His enemies would have claimed that his failure to contest the allegations was tantamount to an admission of guilt. His wife, the staunchly loyal - and in my book, wholly admirable - Gail Sheridan, would have stood by her husband. He could have rebuilt his career, perhaps with a new, Jack-the-Lad dimension to it, and could even have enhanced a media profile.

If Tommy knew the allegations were true, he was extremely unwise to pit himself against the Murdoch empire, and in choosing to do so, he was following the paths of Aitken and Archer, both of whom destroyed their political careers and were imprisoned as a result of their choice. Only cynical self-interest, the instincts of a gambler and vanity could have led him to contest allegations that he knew were true.

If Tommy was innocent of the charges, then given his personality and the core of his political convictions, he was inevitable going to engage in the fight, even though the risks were appalling.

My advice to him, regardless of his guilt or innocence of the charges would have been – don’t do it, Tommy.

Nobody expected him to win, and there is some evidence that he did not expect to win against such a powerful adversary. Although he trumpeted his win in typical barnstorming, populist style, he must have know the inevitability of what would follow. The die had been cast, and a 21st century tragedy was about to unfold.

The second choice was whether or not to defend himself against the perjury charges laid by the Crown. Here, in my view, he had no real choice, whatever his private knowledge of guilt or innocence – he had to defend himself. To suggest as some have done, that he should not have defended himself to save the public purse the expense of a trial is utter nonsense. It is the legal system and the nature of the police investigations that create these enormous cost, estimated at £1m for the police investigation and £4m for the trial.

Sheridan was facing the inevitability of prison and crippling costs that would lead to bankruptcy. In my view, he had to fight, guilty or innocent. Most importantly, it would have been a betrayal of his wife’s unflinching loyalty and commitment to give up. There was no way back.


SHOULD THE PROSECUTION HAVE BEEN INITIATED AND HAS JUSTICE BEEN SERVED?

I say no to both questions. It should have been left the News International to decide what their remedies were after losing the initial civil action for damages.

Perjury, an offence that is committed countless times in every court daily throughout the land, is almost never prosecuted, and the egregious exceptions to this have been political – notably the Jonathan Aitken and Jeffrey Archer (Baron Archer of Weston-super-Mare) perjury prosecutions.

In both these case, the prosecutions were justified by the rationale that these were powerful politicians and public figures – both Tories – who could not be seen to flout the law. Jonathan Aitken was seen as a future Prime Minister: Archer was a life peer and had been Chairman of the Conservative Party.

The same arguments and justification have been applied to the Sheridan prosecution. Why therefore was it wrong to prosecute him?

My answer is that in the Aitken and Archer cases, only they had been accused of perjury – in the first Sheridan trial, the Crown believed that many witnesses must have perjured themselves, but they only chose to prosecute Tommy and Gail Sheridan? Why not the others? Why not the ones who had testified against Sheridan? Why was a police investigation launched that appeared to focus solely on the Sheridans?


WAS THIS IN THE PUBLIC INTEREST

Where did the public interest lie under these circumstances, and where did the other, shadowy interests lie? In a time of economic stringency, was it wise or prudent to divert substantial police resource to investigating allegations of three-in-a-bed sex? To incur a cost of millions to the public purse for a long-drawn out show trial?