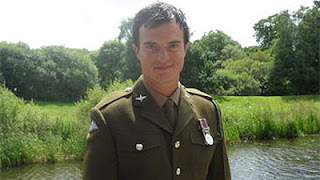 Subrosa did a wee post here yesterday on the loss of a Paratrooper in Afghanistan.

She goes on to mention the Wikileaks saga and the effect it is having.

Anyway back on grid............it is further more upsetting to know that the soldier who lost his life that Rosie mentions was in fact potentially subject of a "blue on blue" or whats know otherwise as a friendly fire incident.

Private John "Jack" Howard, died while on patrol in the Nad-e Ali District of Helmand Province.

The 23-year-old, serving in the 3rd Battalion The Parachute Regiment, could have been shot by cannon fire from a low-flying US plane, the Ministry of Defence said.

This is indeed very sad and a full investigation is being carried out. This needs done as a matter of urgency.

As part of the Fire Support Group a JTAC officer should be present to control airpower. The airpower should report he agrees or disagrees with the coordinates or ground assessment before munitions are released, if troops are in the vicinity of a target.

Clearly and issue has occurred and indeed to learn of a friendly fire one at that further reinforces the delicate position our troops find themselves in.

However...............bearing in mind recent Wikileaks and the comments of the USA Military and Government, and even that of the dirty crook and puppet of the US that is the Afghan President........do we think that anyone but us outside of the UK actually gives 2 shits.