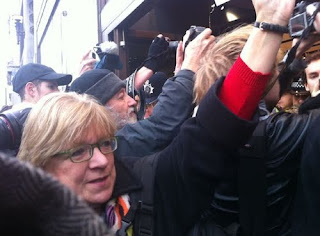 This is just incredible.

Polly Toynbee the Guardian columnist and multi millionaire, champagne swilling socialist, I hasten to add, is snapped here on a protest march at the weekend to "Topshop" aim at the evil Sir Philip Greens empire and something about tax evasion.

Whats wrong with that....................well maybe as Old Pol is a Guardian type person and the whole Guardian Media group has a bit of a thing going on with HMRC.

And I quote..........According to the their own annual report Guardian Media Group made £306.4 million before tax. Using astute tax planning and legal manipulation of the tax laws; such as the use of an equity owning trust and a Caymans Islands offshore corporation to avoid stamp duty, they managed to only pay£800,000 in tax last year.
That is less than they paid the Guardian Media Group’s chief executive, Carolyn McCall, she got a package of £827,000.