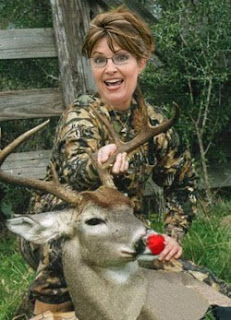 Children were left devastated today at the news that failed Republican vice-presidential candidate Sarah Palin had shot and killed Santa’s chief reindeer, Rudolph. Dancer and Vixen were also injured in the incident yesterday evening as Santa and his team flew over Alaska on their return from a pre-Christmas practice run.

The Palins were apparently enjoying a ramble through the Alaskan wilderness in search of oil and natural gas reserves when they were frightened by a sudden noise overhead. ‘We heard bells jingling and a clatter of hooves, and whatever it was left a twinkly vapour trail behind it,’ said Sarah Palin today. ‘We assumed it was a UFO as they’re pretty common round these parts, so naturally me and the kids unloaded our shotguns into the sky. I couldn’t believe it when three reindeer fell to the ground. My previous biggest kill was a moose.’

There are now real concerns that Santa’s depleted team will not be able to make their deliveries and children everywhere will awake on Christmas Day to empty stockings. Santa was unavailable for comment today and was last seen circling anticlockwise over Anchorage following the loss of his lead right reindeer.

Palin refused to accept any criticism for the death of the famous red-nosed reindeer, explaining that hunting was a way of life for many Americans in remote states like Alaska. ‘Actually the red nose gave us something to aim at. Of course I recognise that this year’s festive season might be a little different now – we have got one hell of a lot of venison for this year’s Christmas dinner.’

LOL, pity it didn't fall on her.