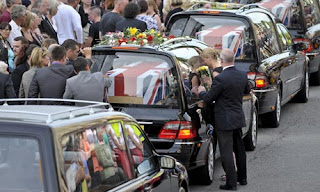 The families of seven servicemen killed in Afghanistan joined thousands of well-wishers yesterday evening as their coffins were driven through Wootton Bassett in Wiltshire.

It was the largest single repatriation since the bodies of eight soldiers were returned to RAF Lyneham last July.

Darbyshire, a father-of-two from Wigan, was killed by small arms fire during a fight with insurgents while on patrol in the Sangin district of Helmand.

Taylor, from Rhyl, north Wales, was killed during an exchange of fire with the Taliban in Sangin. He leaves three children.

Warren, from Preston, was fatally injured in an explosion when a patrol base airport lounge was attacked by insurgents.

Also arriving home were the bodies of Lance Corporal David Ramsden, Colour Sergeant Martyn Horton, Private Alex Isaac and Private Douglas Halliday, all of 1st Battalion the Mercian Regiment (Cheshire). They were killed when their vehicle rolled into a canal near Gereshk in Helmand. The soldiers were part of a police advisory team and were on their way to attend an incident at a nearby checkpoint.

Family members placed flowers on top of the hearses as they paused for a minute's silence next to Wootton Bassett's war memorial. Many relatives wore T-shirts bearing the name of their family member.


However on the same day 2 fabulous ceremonies took place, In the biggest parade since start of Afghan conflict, Winchester payed tribute to 11 Light Brigade after costly six-month tour.


They fought with "immense courage", lost 64 of their comrades and witnessed yet more seriously injured.

Now they were home. And the city of Winchester turned out in its thousands to pay tribute to the men and women of 11 Light Brigade at a homecoming parade today, the biggest of its kind since the start of the Afghan conflict.

Amid flag-waving, cheers and some tears, 650 troops from the brigade's 12 regiments marched six abreast through the city's streets to mark the end of a six-month tour of Helmand which exacted a heavy toll.

This was no celebration, despite the applause. As the marching bands played, and two RAF Tornado jets performed a flypast, the thoughts of the watching crowd were with those who were not there.


Also at the same time, 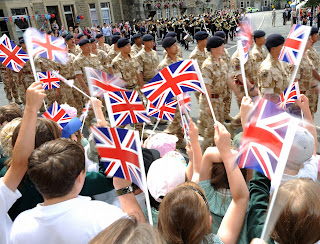 Soldiers from 9 Regiment, The Royal Logistic Corps (RLC), marched through Malmesbury yesterday where, in addition to receiving their Afghanistan operational medals, they were awarded the “Freedom” of the town.

Personnel from 9 Regiment completed their 6 month deployment to Afghanistan in May 2010. Those deployed were mainly from 94 Squadron Group with the backbone of personnel being Gurkha soldiers.

The event organised by the Town Council saw troops, dressed in their desert combat uniforms, forming up at the War Memorial in Malmesbury. From there, they were led by the band of the Royal Logistic Corps to the Town Square, where around 150 personnel from the Regiment were presented with their Operation HERRICK medals.
Posted by The Last Of The Few at 09:24