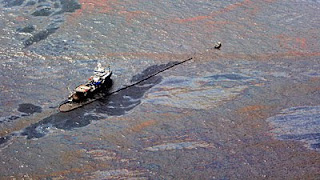 I have watched you with great interest our the current environmental catastrophe that is the BP oil Well Blow out in the Gulf of Mexico.

I can without fear say that despite every thing you are indeed an absolute cretin.

First thing is its easy when you are probably in your short time in office 1 of the most unpopular presidents ever to have a go at an oil company.

Hell you do need the support of the green lobby and every other socialist you can get.

Its also easy when its a British Company in the firing line, 1 has to question if it was an Amoco or an Exxon if such a line would be taken.

It interesting to note the way you appear on morning TV with your video of you walking down a beach, shaking your head, picking up little bits of black and brown stuff. Using your own children as a vote winner and media seeker.

Now Sir dont get me wrong it an absolute shocker of a situation, an environmental disaster. I don't like to see the fish, birds and marine life on my TV but its happened.

You need to be aware this was a once in 10's of millions of a chance. Every current known safety protocol was actuated and actioned. It did not stop this unique blow out.

Every single marine engineering brain is on this problem. BP is one of if not the best in the world in these situations. Many emails, video call, engineering drawings, plans, re-plans, replans-plans are being drafted in order to seal this well off.

Its 5000 ft below the surface. That about a bloody mile. Pressure are inexcess of 150bar.

What is not needed is a President coming on TV with his whining and windging, blaming everyone else and stating you know more than them on the subject, they are stupid and that you are taking over.

I am not defending the disaster, what I am stating is that you should be more Presidential, you should be supporting the effort to fix the issue. The time for recriminations comes after.

This disaster is about the 3rd worst on record. It pails into insignificance compared to the what the Iraqi's did to the Gulf after the first conflict in an effort to burn the sea........ That is now clean.

The sea will correct itself once the spill is capped. The eco system will return. You have crude oil here not distilled petroleum. The crude oil is still in its natural area.......but it will take time, that i accept.

The pressures are more than 150bar. That's only about 4,000 psi. It's 140,000 psi in that oilfield.
Got to laugh at Obama calling in the FBI. I don't remember Special Branch investigating the Piper Alpha disaster caused by the US company Occidental. Or scrutinising their failure to cough up compensation until years later.
Oh and India had thousands killed at Bophal by US company Union Carbide. Still no decent compensation there. Or the spraying of DVT over the people of Cambodia and Vietnam. No compensation there despite birth defects to this day. Or compensating the Iraqis for firing depleted uranium into civilian houses. Still no compenastion there. heck the list is endless. Maybe it's comeback time for the US. Doubt if Obama will make a comeback though.

However i bow to yourk psi i will go check my tables.