I read this post from Subrosa and Radio Free Britain and sadly I am not surprised at the tone in which they are written. No that is not me even daring to castigate another blogger..........indulge me please.

As many readers will be aware TLOTF has a unique job at times. I have indeed spent in my very recent past a great deal of time in Afghanistan. For newer reader I am ex-military and now work for a civilian company.

Please see the photos below. 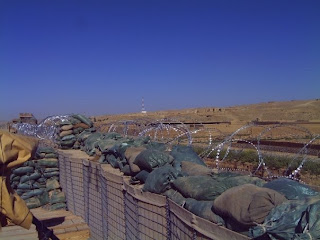 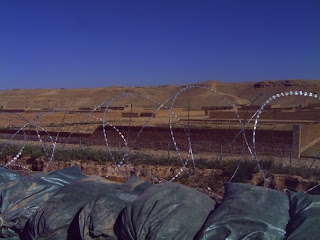 These are taken over the wire at a FOB in the same place as detailed in the above posts by Subrosa and RFB.

They are the small town of Chagcharan in Gohr Province, Afghanistan.
Chagcharan is high, some 7500 ft above sea level. It is about 400km from Kabul and although a short distance it is night and day in terms of standards even from that of Kabul.

Chagcharan gets electricity for about 3 hours a day, Running water is non existent and comes from wells. The water from these wells is not safe for the troops to bring into the camp to use. The camp water passes through a treatment unit in a 20ft ISO container before use. Bottled water if flown in or trucked in when safe to do so.
No doctor, no paved, or asphalt roads, and a school for males only.

If you look in 1 photo you will see a red and white mast tower. No this is not a military comms unit, it is actually a cell/mobile phone mast. It belongs to a company called Roshin. Roshin is the Afghanistan national cell phone company.

You see although no doctor in the town, they use the camp military doctor (hearts and mind thing), no running water, well except the few with a dollar or 2, electricity 3-4 hours a day they all have cell phones.

During my last tour there I had the assistance of a local chap. His name was Farat. Farat was a well educated man, but a well educated man who also had a brain. Farat escaped Kabul and returned to a rural life. The reason was despite what you saw in the video here was his daughters.

Farat had 3 children, a son and 2 daughters. Farat used to work in a bank in Kabul. He speaks good English. He even taught me some Farsi whilst I was there. Certainly enough for me to have a pigeon conversation. Anyway his daughters became his priority. His work with the ISAF forces in 2001/2002 became his issue. Farat was ousted by his community as a collaborator. He also knew 1 thing. In order for his girls to survive they needed educated. Once the underground in Kabul realised his girls were getting educated together with his work at ISAF he had to leave.

He picked up what he could, loaded it into his car and with his wife and children drove for several day and arrived in Gohr Province. The rural nature of Chagcharan meant he could educate his girls privately, sometimes at night by candle, but he could teach them maths, reading and to speak English which he viewed as the ultimate prize.

Farat was a lucky man. He put his family before everything. His children were his life. He resisted many offers of the arranged marriage of his girls. When they hit 14years old he knew many suitors would be put before him. However he resisted.

The ISAF camp became the life blood for all villagers in Chagcharan. It employed many. It pumped a few dollars into the town. They could trade with other villages. Farat again used his English skills as a translator. Farat came to work for me. I got to know him well, I met his family. Although somewhat clandestine usually meeting at night it had to be done. He wanted me see a side of life that others did not. I accepted his invite, I was honoured.

His family were amazing. His wife would never look me in the eye, but I could tell from the eyes under the burka was a most beautiful woman. She wore a hajib in the privacy of the house but a burka when out. Especially if we were travelling through the village.

The day I left Chagcharan was the day I knew I had left a friend behind. I saw Farat that morning, we exchanged our usual Afghan greeting and I showed respect to his wife. I had approx 120 US Dollars in my pocket in cash.

I gave it to him in his hand. He gave it me back, he was a proud man.

This money was a fortune. Many others in that village would have killed me for that amount of cash. So I did the decent thing, I put it back in my pocket and when his back was turned I gave it to his wife who bowed and hid it under her hajib.

As my plane left the ground I remember not looking at him, I could not, but i knew he watched the transport flight lift off into the sky and disappear into distance.

I respect Subrosa, I like her writing.
I read RFB regularly..........however I wanted some balance here. I am privileged. I have been to the place in the video, and in a sentence despite, the poverty, the pain, the misery, and the backward nature and barbarism displayed in the video there are some there with a heart, a soul and who show kindness, who have an inner strength that even makes me look small.

A super account of a little of your time in that area LotF.

My problem is this. Are our army now the social services of Afghanistan? If so that's fine with me, but let's charge their government for it. The country isn't bankrupt. It's their government which imposes the poverty upon the people. The Afghan government hasn't changed in all the time we've been there, according to information I've had. Oh yes, faces may have changed, but the corruption goes on at the same pace.

My problem is that it looks as if our military will be in this country for generations. It takes that for any country to change and that only happens if the majority of the people want it. For me that's not a price worth paying as I can't see much changing.

It's hard to protest against wealth. Not many of us common folk won against the wealth of the great and good of this country in the past. It always took a few of the wealthy to take the side of the masses, then action was taken.

There are millions of people in a similar situation to your Afghan friends all over the world. I saw despair and poverty just a few miles from the new stadium in S Africa on tv last night. Yet, the west will go to S Africa and ignore these people.

I didn't intend to criticise the Afghan people in my post. My intention was to point out just how much of a male dominated culture it is - along with others in that region.